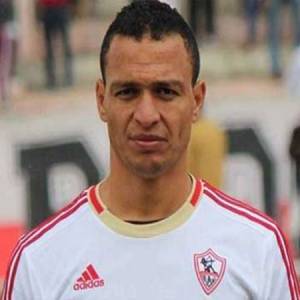 Hamada Tolba is a professional Footballer from Egypt who currently plays as the sweeper, Center back and right back for National Team of Egypt and ENPPI Sporting Club. The 36-years old footballer played for Al Merreikh, Suez Cement, Smouha SC, Misr Lel-Makkasa, Zamalek SC and Al-Masry SC previously.

Hamada Tolba was born on June 17, 1981, in Port Said, Egypt. Regarding his nationality, Tolba is an Egyptian.

Tolba's currently earns around $400,000 as a yearly salary form his current club. The exact net worth of Tolba’s is unknown but is believed to be about $500,000. He might also be connected with some local and international brands as a part of endorsement deals.

Hamada Tolba began his career as a member of the Al Merreikh in 1995 as a right back. In 1999, he was promoted to the senior team and played as winger and defender-midfielder as well.

Tolba was signed by Smouha on July 1, 2010. For the club, he scored 2 goals in 29 appearances as a defensive midfielder.

For the team, Tolba played as a center-back until Mohamed Abdel Shafy the main left back the club. He then began playing as a left back. In 2016, he left the club after making 99 appearances scoring 2 goals.

On August 2, 2016, Tolba was transferred to El Masry on a free transfer. Before leaving the club, he played 2 games.

Hamada Tolba was called the up to an international team in 2015 by manager Hector Cuper to face Chad in a friendly match.

On February 27, 2016, Tolba made his international debut against Burkina Faso in a 2-0 win. He has been capped 3 times for his national team.

Tolba is supported by Ali Gabr, Saad Samir, and Omar Gaber in the international games.

Hamada Tolba seems to be a married man but there is no any official information about his marital status or dating issues.

The football star, Tolba hasn’t really spoken about his relationship and girlfriend.

He has a standing height of 5 feet 7 inch and weighs above 75kg.