The professional footballer spent all of his youth career at Deportivo Cuenca, and later, he became a part of multiple teams. So, being with them, Vallecilla has played in various games and also helped the squad to win many of the matches by giving his best performances. Meanwhile, he also played for Barcelona SC on loan and was part of the team that took the title of Ecuadorian Serie A in 2020.

Starting with his personal life, Vallecilla appears to be a married man as he frequently shares photos with his partner on his Instagram account. The name of his lover, who also seems to be his wife, is Alexandra Vr. The cute pair have visited different places together, and they also shared some moments on Instagram.

Despite that, both of them have not talked much about their love life. So, the information about their marriage date and event remains under review. Besides that, Vallecilla is also a father of two kids, a son named Lian and a daughter named Mia. Furthermore, Vallecilla is pretty close to his kids, and he spends most of his spare time with them. Not only that, but Vallecilla loves featuring them on his Instagram account. For your information, Vallecilla's partner, Alexandra Vr, is also an active Instagram user who can be followed on the respective platform under the username @alxandravr.

In the past, Vallecilla has played for various teams, and since joining Major League Soccer club Colorado Rapids on March 28, 2022, Vallecilla has been with them. As per a report, Vallecilal joined the team by receiving $800,000 and also extra performance-based fees.

According to a report given by Transfermrkt, Vallecilla's market value is €800Th. Meanwhile, Vallecilla also played for FC Cincinnati in the past, and Salary Sport reports that he earned £820 weekly and £42,640 yearly. Before that, he was a part of the SD Aucas but left them on January 1, 2022, to join Cincinnati. Not to mention, Vallecilla received a transfer fee worth €909Th while leaving SD Aucas to join Cincinnati. 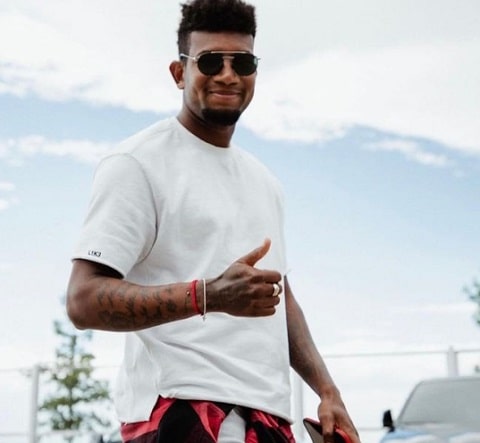 In addition to that, Vallecilla is also a national player who has represented the Ecuador National Team in various games and events. In Ecuador, a football player's gross salary is $16.897 or an equivalent hourly rate of $8. Not only that, but the footballers can also earn a bonus of up to $426. So, it can be said that Vallecilla is making a good amount of money from being a professional football player.

Moreover, Vallecilla has preserved a decent fortune, and his net worth is not less than a million dollars. Vallecilla flaunts his lavish life via his Instagram handle.

As said earlier, Vallecilla began his football career by playing with Deportivo Cuenca, and during that time, he was just 15 years old. His professional debut for the club came on November 27, 2016, when he played a game against Mushuc Runa S.C. in the Ecuadorian Serie A. The following season, Vallecilla just made one game appearance, and in the 2018 season, he appeared in 15 games.

After that, Vallecilla received a chance to play with another team and got signed with S.D. Aucas, and from 2019, he began playing for S.D. Aucas. From 2019 to 2021, Vallecilla made eight game appearances. Likewise, Vallecilla was loaned to Barcelona SC for the 2020 season with an option to buy. Being with the Barcelona SC team, Vallecilla appeared in 15 games. Moving onwards, Vallecilla joined Major League Soccer club FC Cincinnati on loan on April 5, 2021, to play for the 2021 season. And on May 16, 2021, Vallecilla made his debut for the team by playing against Inter Miami. On May 22 of the same year, Vallecilla scored his first goal for Cincinnati in a match versus CF Montreal. Later, on March 28, 2022, Vallecilla joined Colorado Rapids.

Speaking of his international career, Vallecilla has played for the U20 and U23 Ecuadorian national teams. And on December 5, 2021, he made his debut for the senior squad by playing against El Salvador at PNC Stadium in Houston, Texas.

Gustavo Vallecilla was born Exon Gustavo Vallecilla Godoy on May 28, 1999. Vallecilal spent most of his early days in Esmeraldas, Ecuador, as he is a native of the same place, but Vallecilla left his hometown just at the age of 15 to start his career as a footballer.

Meanwhile, Vallecilla is a very private person when it comes to the topic of his family background. Due to this reason, the information about his parents remains under review. Talking about his physical build, Vallecilla is a tall guy whose height measurement is 6 feet 1 inch (1.85 m).

Gustavo Vallecilla is an active social media user who is mainly available on Instagram. We can follow him on the respective platform under the username @gustavovallecilla_5. His IG bio shows that Vallecilla is represented by BLSPORTS. For more interesting facts about your favourite athlete, including their professional, personal, lovelife, and earnings stay tuned to Playerswiki.com.