Gregory John Norman is a Australian Professional Golfer, Philanthropist, and Entrepreneur. He is ranked as one of the millionaires in golfing history with other prominent personalities such as Jack Nicklaus and Phil Mickelson. He was ranked #1 in the official world golf ranking for 331 weeks in the 1980s and 1990s. He has won 88 professional tournaments and was the first person to surpass $10 million in Career Earnings. He was introduced into the World Golf Hall of Fame in 2001 with the highest percentage of votes (approx 80%).

The Queensland native was born on 10 February 1955 under the star sign Aquarius. He was born on Mount Isa, Queensland, Australia to parents Toini Norman and Merv Norman. He currently resides in Jupiter Island, Florida, U.S. Gary Nicklaus also lives in the same area. He has two grandchildren: Harrison and Hendrix.

His nickname is The Great White Shark which is also referred to as the Shark.

Greg Norman Net Worth in 2020; How much does he earn annually?

The 6' 0'' tall has an estimated net worth of $300 million through his professional career and through the different ventures that he owns.

The 82 Kg has been in multiple relationship in his entire life. His first romantic encounter was with Sue Barker who was a British Tennis Player. They had a brief relationship before he met Laura Andrassy.

The couple tied the knot on July 1981. They had two children, Greg Norman Junior, and Morgan Leigh. After 25 years of a successful marriage, the couple parted ways in 2006. Andrassy received $105 million as a marriage settlement.

The world no. 1 golf player then married the world no. 1 tennis player Chris Evert on Paradise Island in the Bahamas in June 2008. But they seperated only after 15 months of marriage and subsequently divorced.

On November 2010, Greg tied the kot with interior designer Kirsten Kutner on Necker Island in the British Virgin Islands with Greg junior as his best man.

Greg Norman hosts QBE Shootout which was perviously known as the Shark Shootout. The event is held on Tiburon Golf Club in Naples, Florida. The Money collected from the event is used towards the CureSearch National Childhood Cancer Foundation.

The foundation provides guidance and instruction throughout Queensland to school students and those in other educational establishments, children with physical disabilities and junior members od golf clubs. 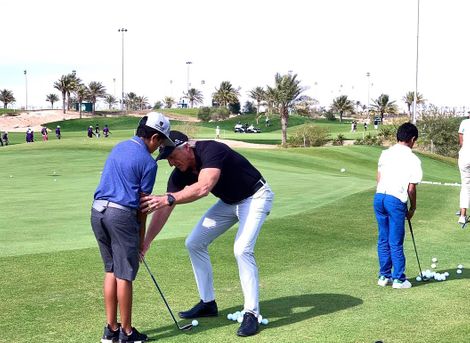 Norman also became the Trustee of the Golf Course Superintendents Association of America and a member of its advisory board since 2004.

The Environmental Institute for Golf the philanthropic arm of the Golf Course Superintendents Association of America (GCSAA), is a collaborative effort of the environmental and golf communities, dedicated to strengthening the compatibility of golf with the natural environment.