Arnold Palmer was an American professional golfer who was one of the most charismatic players in the sport's history. He has won numerous events on both the PGA Tour and the circuit. In the entirety of his career, he won 62 PGA Tour titles.

Palmer ranks fifth on the Tour's all-time victory life behind, Sam Snead, Tiger Woods, Jack Nicklaus, and Ben Hogan. He was the first superstar athlete of the sport's television age which began in the 1950s. For his personality, he was nicknamed The King. His clothing and personality mixed with his charm was a perfect recipe to grab the media attention.

The net worth of Arnold Palmer during the time of his death was valued at $875 million. He was one of the highest earning golfers of his time and held the title for many years even after retirement.

His earnings or salary from his career as a pro golfer were quite high which helped him to become the first player to win $1 million in career earnings. 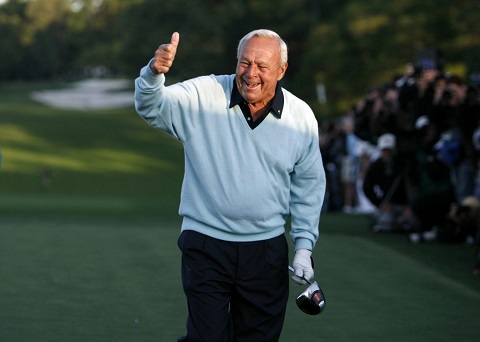 He made his fortune not only through career earnings but from business investment as well as endorsement invitational from various companies as well. After death, Palmer's money was divided between his two daughters, his second wife, eight employees, and his charity Arnie's Army.

Arnold Palmer married Winnie Walzer in 1954. He was together with Walzer for 45 years until her death on November 20, 1999. He had two daughters from his marriage with Walzer.

Palmer got married again and his second wife was Kathleen Gawthrop who he married in 2005. He did not have any children of his second marriage.

Arnold Palmer died on September 25, 2016. He was awaiting heart surgery at the University of Pittsburgh Medical Center during his time of death. He had only been admitted three days earlier to undergo the testing on his heart.

Arnold Daniel Palmer was born on September 10, 1929, in Latrobe, Pennsylvania to parents Doris and Milfred Jerome Palmer. He learned golf from his father who was head professional and greenskeeper at Latrobe Country Club.

He attended Wake Forest College on a golf scholarship. He was enlisted in the U.S. Coast Guard where he served for three years and later returned to college and competitive golf. In 1954, Palmer won the U.S. Amateur in Detroit which helped him to make the decision to turn pro in November of that year.

1955 was the rookie season of Arnold Palmer where his first tour win came with his victory in the Canadian Open. Coming from a humble background with charisma, he was the first person to make golf compelling in television and is the reason that golf is enjoyed so much as a sport as well. The first major win of Palmer was in the 1958 Masters Tournament. He signed up with the pioneering sports agent Mark McCormack as his first client.

Palmer traveled to Scotland in 1960 to compete in the British Open for the first time. He played one of his best career game during that event but lost to Kel Nagle by a single shot. Many thought that he was the greatest to play the game during that time. His commitment to travel cross-country for the sake of competition got him credited by many for securing the status of the Open Championship among U.S. players.

Arnold Palmer was only able to achieve a runner-up finish in the 1960 British Open but he went on to win the 1961 and 1962 Open Championship. HIs participation in the Open Championship helped to internationalize golf. The years from 1960-1963 were his prominent years when he won 29 PGA TOur events which include five major tournaments in four seasons. By 1967, he had made $1 million in career earnings on the PGA Tour becoming the first man to do so.

The 2004's Masters Tournament was the last time that Arnold Palmer made his appearance in the competition which was his 50th consecutive appearance in that event. He retired from golf on October 13, 2006, after being dissatisfied with his own play in the Champions Tours.

Aside from professional plays, Palmer also invested in a golf-related business career. He owned the Bay Hill Club and Lodge in Orlando Florida. He has designed more than 300 golf courses in 37 states, 25 countries, and five continents.