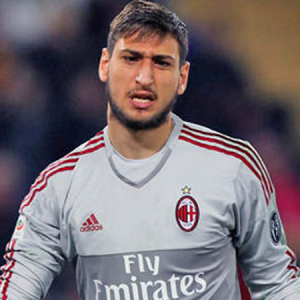 A native of Castellammare di Stabia, Gianluigi Donnarumma was born on 25th February 1999, to Alfonso Donnarumma and Marinella Donnarumma. His birth sign is Pisces. Regarding his nationality, Gianluigi is an Italian and he belongs to white ethnicity.

Gianluigi grew up alongside his two siblings; sister Nunzia Donnarumma and older brother Antonio Donnarumma who is a professional footballer who currently plays for Milan.

At the age of 4, Donnarumma began his football journey with Club Napoli where he remained till 2013 and then switched to Milan.

At 14, Gianluigi Donnarumma signed with Milan for $293,970. Throughout two seasons in the club, he played in the age group above him.  On 22nd February 2015, he was first called up to the senior squad of the club by manager Filippo Inzaghi.

On 30th July, he made his professional debut against Real Madrid in an International Championship Cup. Similarly, on 25th October, Donnarumma made his Serie A debut against Sassulo at the San Siro stadium.

On 11th July 2017, Donnarumma signed an extension agreement with Milan until 2021.

So far he has made total 84 appearances.

Gianluigi Donnarumma has represented his nation in several tournaments both in junior and senior level. He was a part of Italy U-15, U-17, and U-21 national team.

On 27th August 2016, Donnarumma received his first called up to the senior squad by  Gian Piero Ventura. On 1st of September, he made his international debut in a match against France in a 3-1 home loss.

So far, he has earned 4 caps his national side. Donnarumma is a good friend of Marco Parolo, Federico Bernardeschi, and Davide Astori.

The young talent, Gianluigi Donnarumma is neither married nor single; he is in an open relationship with Alessia with whom he is rumored to be engaged. The couple has been together for a long time. His lady, Elefante is sweet half of him who is a 20-year-old student, originally from Castellammare di Stabia.

The two often make public appearances together. Donnarumma often shares their adorable picture on Instagram and Twitter. They spend quality time together wandering mesmerizing holiday destinations together in their vacations. There is no sign of break-up as the couple shares deep bond and love between them.

The hero of the field, Gianluigi Donnarumma is a wealthy man. He has earned huge name, fame, and money through his professional football career. As of 2017, Donnarumma gets paid $70552 weekly and his annual salary is $3.6 million which he earns from his native FC Milan. His current market value is $29.40 million.

As of now, Donnarumma has an estimated net worth around $4 million.

Currently, he resides in an unknown fashion in Italy. He always carries himself with the expensive dress and accessories which indicates his lavish and luxurious lifestyle.