Gerard Moreno is a Spanish professional footballer who plays as a striker for the Spanish team, Villarreal of the La Liga tournament, and national with the Spanish football team. With Villarreal, his major achievement came in 2021, when he won the Europa League final beating the English team, Manchester United.

Moreno was born in Santa Perpetua, Barcelona, Spain on April 7, 1992. As a youth, he trained under/played for clubs like Damm, Espanyol, and Badalona.

Moreno spent three years with local FC Badalona from 2007 to 2010. After that, he joined Villarreal CF and made his debut with the team on March 5, 2011, in a 1-2 home loss against Rayo Vallecano.

During his early spell, Moreno also played for Villarreal's third team and was a top scorer in Tercera Division - across all competition he made 39 appearances and 34 goals. Gerard Moreno has been projected as the top prospect for Spain at the Euro 2020. SOURCE: Instagram

He then played for the team's B side in Segunda Division scoring his first goal on December 10, 2011, in a 3-1 home victory over Xerez CD. For the second team, he scored a combined 13 goals in a total of 29 games. He was first lined up for the main team in a match against Elche CF in 2012. The yellow submarine lost the match through a score of 0-1.

He scored his first goal with Villarreal's main squad on January 25, 2013, in a 3-0 win over CE Sabadell FC. Between 2013 and 2014, he spent a brief time with Mallorca playing again in the second division of the Spanish league.

He returned to Villarreal on September 14, 2014, making his La Liga debut in a goalless draw against Granada FC. On August 13, 2015, he signed a five-year deal with the fellow Spanish team, RCD Espanyol.

For the Catalans, he made 107 appearances whilst finding the back of the net on 36 occasions. He rerouted to Villarreal on June 12, 2018, and since then has scored 49 goals playing 103 times across all competitions. He became a joint top scorer at the 2020-21 Uefa Europa League with Pizzi, Borja Mayoral, and Yusuf Yazici.

Moreno made his International debut on October 15, 2009, in a one-all draw against Sweden for the UEFA Euro 2020.

Spain's coach for the Euro 2020, Luis Enrique Net worth and Life after his daughter's tragic death

Moreno's net worth is estimated to be around £4-£5 million taken from the approximation that he has netted around £11 million in career earnings since 2014. He reportedly received a total amount of £3.3 million from his 2018-2019 season with Villarreal - wholly in the form of salaries. This is the highest payout sources have ever reported in the case of Spanish forward.

He allegedly pocketed £374,000 having played the 2013-2014 season with RCD Mallorca. Upon his return to Villarreal for the 2014-15 Segunda campaign, he was subjected to a salary deal of £426,400 - an amount projected by several insiders after that year's La Liga Second Division competition.

With RCD Espanyol Moreno bagged more than half a million pounds by the end of the year 2016. The following season, his salary amounted to £1.92 million. His salary for the 2017-18 season was detailed at a little over £2 million. His current wage with the El Submarino is set at £1.82 million a year.

The five foot eleven forward is married to Nuria Moreno whom he started dating back in 2009. The couple at the time was still a teenager and studying at school. They had their nuptials on June 29, 2018. They welcomed their first child, a daughter, Melissa Moreno on April 4, 2017. 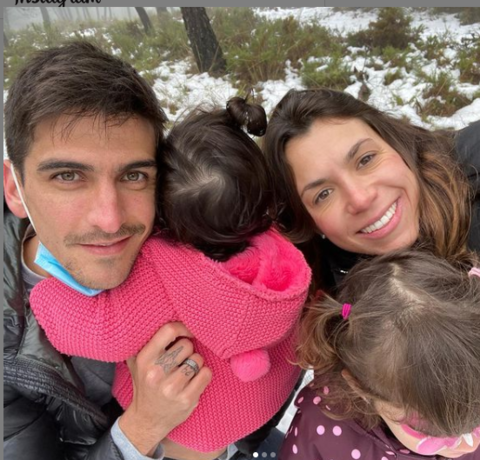 Three years later, they produced their second girl, Marta Moreno on March 3, 2020. Moreno's followers have been familiar with Nuria since 2015. She has been with Villarreal's number 7 for as long as his groupie could remember. He however publicly revealed his relationship with Nuria on 2016's Valentine's day through his official Instagram handle. 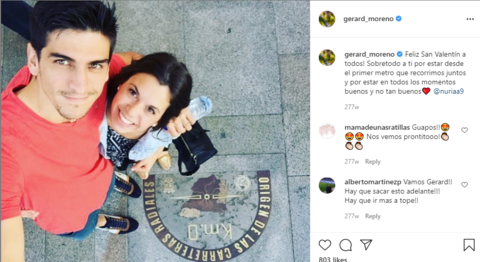 The post features Moreno and his future wife getting selfied at Annex: Radial Roads of Spain with a caption that reads, "Happy Valentine's Day everyone! Especially to you for being from the first meter that we traveled together and for being in all the good and not so good moments."