Georges-Kevin Nkoudou Mbida is the professional soccer winger of the Super Lig football club Besiktas. For his current team, he wears jersey number 7. Moreover, Nkouodu represents Cameroon national football team in international competitions. Before making his presence in Super Lig League, he has experience playing in several world-class leagues, including Premier League, Ligue 1 and many more.

The former star player Georges-Kevin Nkoudou  Mbida is a player with mixed racial nationality, born on February 13, 1995, in Versailles, France. Nkoudou is currently 27 years old, and his star sign is Aquarius. For your information, despite being born in France, his ancestry came from an African background, i.e., Cameroonian. The player holds dual citizenship in France and Cameroon. Also, he is a former French youth international. Furthermore, there are no facts on his family matter, so it remains under the radar.

How Much Does He Receive From Besiktas?

According to the report, his current net worth is $9 Million. Notably, French-Cameroonian nationality Georges-Kevin Nkoudou is ranked in the number eight spot among the hugely earning players at his current club. As a Besiktas, the 27-year-old winger allegedly makes £40,000 per week and £2,080,000 per annum. Likewise, he is also a former player of several famous clubs, including Tottenham, Marseille, etc. His former club teammate Dele Alli is the highest-paid player with an annual paycheck of £5,200,000. Previously at Tottenham, the player netted a weekly play of £35,000 and £1,75,0,000 per annum. Undoubtedly, he is one of the wealthiest soccer players in the world. Additionally, Nkoudou is sponsored by the renowned brand Nike which often broadcasts on its social media platforms. His value in the transfer market is currently priced at €5.50 Million.

The ex-Nantes player Nkoudou's relationship status is very suspenseful as he has never uttered about it. He seems an excellent secret keeper who has completely bared his personal life away for the media. Not to mention, due to his low-key life, most people are unexplored of his life. Therefore, we could not express his relationship status due to a lack of evidence.

Everything On His Footballing Career

the 5 ft 8 inches tall Georges-Kevin Nkpoudou, 27, kicked off his footballing journey in 2006 at the age of eleven with Petits Anges. Indeed, he played his youth career for EST Solitaire Pairs, Paris Saint-German, Ac Boulogne Billancourt and Nantes. Afterwards, he professionally started with Nantes's first team in 2013, debuting on August 11, 2013, in Ligue 1. After two seasons, he moved to a fellow club Marseille for a season. Subsequently, Nkoudou got transferred to the European side, joining Tottenham Hotspur on August 13, 2016, for €11 Million. 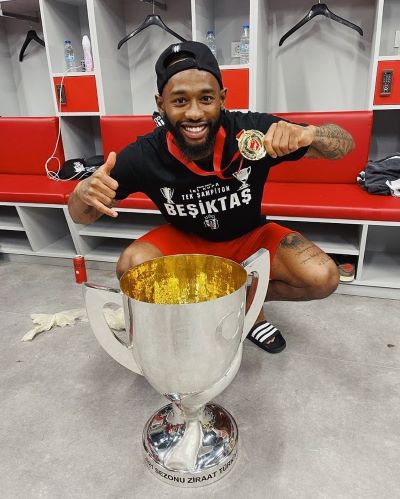 Reportedly, he made his Premier League debut against Gillingham in League Cup. In his three years contract with Tottenham played a season with the team and another with Burnley and M0naco on loan. After his release, he joined Suoer Lig's singing contract with Besiktas on August 22 2019.