Kellie Harper is a well-known American basketball coach. She has been working as the head women's basketball coach of the Tennessee Lady Vols. Kellie worked with several other franchises like Missouri State, North Caroline State, and Western Caroline before moving to Tennessee. She has been serving as a coach for almost two decades.

Kellie Harper was born Kellie Jean Jolly on May 3, 1977, in Sparta, Tennessee. She is among the two children born to Kenneth Jolly and his wife. Kellie was also a basketball coach and is the one who introduced Kellie to basketball. She spent most of her childhood in the gym and on the farm. Lately, Her father passed away. She has a younger brother named Brent Jolly. Talking about her physical appearance, Kellie stands five feet and ten inches tall and weighs over 65 kgs.

Harper has been working as a basketball coach for more than fifteen years. She started her career as a player and later turned into a coach. Kellie has an estimated net worth of $3 Million. The basketball coach has an annual salary of $750,000 from Tenneessee Lady Bols. She is among the highest-paid female coach in the WNBA. 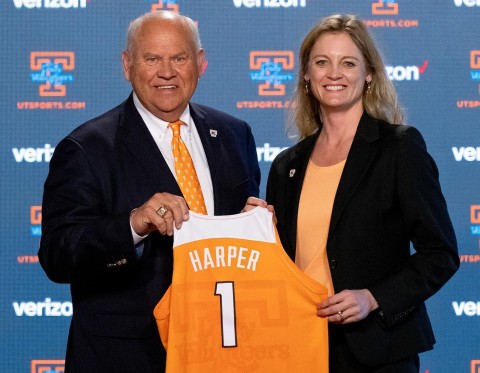 Harper has been working as the head coach for Tennessee Vols SOURCE: Tennessee News

In 2019, Kellie signed a five-year deal with Tennessee worth $4 Million. Harper will receive an annual base pay of $275,000 along with supplemental compensation of $475,000. She could also earn an extra $50,000 for taking the team to an SEC regular-season championship during her tenure. Kellie could take home $150,000 if the Lady Vols go all the way and become NCAA Champions.

Kellie is living a happy married life. She tied her wedding knot with her longtime boyfriend, Jon Harper, in 1999. The love birds had been dating each other for some time before their marriage. Jon has been working alongside Kellie at Tennessee as an assistant coach. 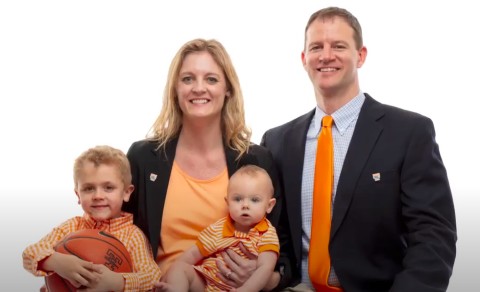 Kellie Harper with her husband and Children SOURCE: Knosnews

Kellie and Jon are the proud parents of two children, Jackson and Kylie. Both of them are very much supportive of their children. They can be seen attending their parent's games regularly. Besides this, The couple has been successful in keeping their personal life away from the media.

Kellie was part of the NCAA Champion team for three consecutive years, from 1996 until 1998. In 1999, She retired from playing, and the following year, Harper started working as an assistant coach for the AuburnTigers. She worked there for two years and moved to Chattanooga Mocs. In 2004, Kellie then got an offer to work as a coach for Western Carolina.

Harper started working as the head coach of Carolina. In her debut year, her team won SoCon Tournament. She was part of the team until 2009. Kellie moved to NC State in 2010 and worked there until 2013. The coach did not have a promising career with the team and changed to Missouri State.

In 2019, Kellie signed a five-year deal with Tennessee. In the first year, The team won MVC Tournament, and she was named the MVC coach of the year. She is among the highest-ranked female basketball coach in the states.