A Mexican mixed martial artist, Gabriel Benitez currently competes in the featherweight division in the Ultimate Fighting Championship and was the lightweight contestant of The UFC Ultimate Fighter: Latin America.

Gabriel Benitez's Net Worth and Endorsement

Benitez's has earned his wealth widely through his professional MMA Career. As of 2021, his main source of income is UFC. Nevertheless, the exact figure of his net worth is still under review. 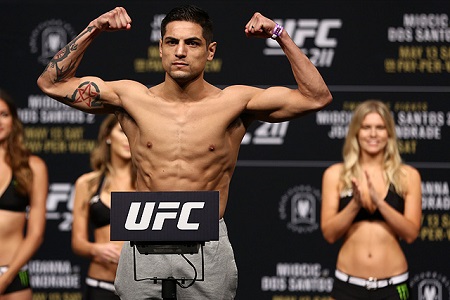 Gabriel's UFC career earnings is reported to be around $300,000.

Gabriel Benitez's Relationship and Affair; Is he Married?

Gabriel Benitez, 33, is a happily married man. He exchanged the wedding vows with his long-time girlfriend on 19th February 2011.  However, he has not disclosed much information about his wife.

As of 2019, it’s almost 8 years of their married even though their relationship is going smoothly without any new and rumors of an extra-marital affair, conflict, and divorce.

Gabriel Benitez was born on 15th June of 1988, in Tijuana, Baja California, Mexico. His birth sign is Gemini. Regarding his nationality, he is Mexican.

Not much known about his past life such as his childhood, parents, and education background, he is a private person. At the age of eighteen, Benitez made be began training mixed martial arts training. In addition, before he started fighting, he was a promoter for a soda company.

Since 2007, Gabriel Benitez began MMA professionally, making his debut in his home country and he recorded a 16-4 before signing to UFC.

In April 2014, Benitez got selected as one of the members of The Ultimate Fighter: Latin America 1, UFC The Ultimate Fighter television series, under Team Cain Velasquez. Later, in the elimination round, he submitted Diego Rivas by rear-naked choke in the second round. He next faced Leonardo Morales in the semifinals and got defeated by unanimous decision.

On 15th November 2014, Benitez made his UFC debut against Humberto Brown, at UFC 180. He recorded his victory in his debut fight via guillotine choke in the third round. His Second UFC fight came against Clay Collard at UFC 188, on 13th June 2015. He won the fight via unanimous decision.

He next faced Andre Fili at The Ultimate Fighter Latin America Finale: Magny vs. Gastelum on 21st November 2015. He got defeated via KO in the first round.

On his fourth appearance for UFC night, he took on Sam Sicilia on 17th September 2016 at UFC Fight Night: Poirier vs, Johnson. He won the fight through guillotine choke in the second round.