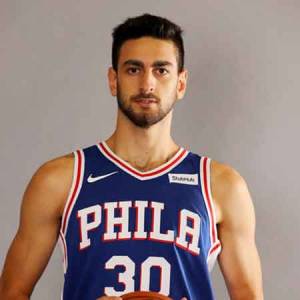 A Turkish professional basketball player, Furkan Korkmaz currently plays for the Philadelphia 76ers of the National Basketball Association (NBA). He was selected in 26th in 2016 NBA draft.

Korkmaz mainly plays the shooting guard position. Before playing for 76ers, he played for Banvit of NBA. Moreover, Korkmaz has further played for the junior as well as a senior National team of Turkey.  As of 2018, Korkmaz earns the base salary of $1,740,000.

Furkan Korkmaz was born on 24th July 1997, in Bakirköy, Istanbul, Turkey. He is the son of Dursun Korkmaz. Krokmaz belongs to an American nationality Turkish Nationality.

Korkmaz began playing basketball at the age of nine along with the school team. At the age of 15, he moved to Anadolu Efes, from Efes' junior team, Yesilyurt Spor Kulübü, for $250,000.

Initially, Furkan Korkmaz played for junior and youth teams of Anadolu Efes. During 2013–14 season, he was loaned to Turkish 2nd-tier level TB2L team Pertevniyal. On 13th June 2016, Korkmaz was drafted to 2016 NBA draft on.

Philadelphia 76ers selected him in 26th in the first round. Later Korkmaz was loaned to Banvit by Anadolu Efes in December 2016. He won the Turkish Cup with Banvit in February 2017. Moreover, Korkmaz further won Basketball Champions League (BCL) Best Young Player award of the 2016–17 season of the European-wide third tier level.

Similarly, Korkmaz signed for Philadelphia 76ers on 4th July 2017. However, during rookie season, he received several assignments to Delaware 87ers. In the first game of the 2018 NBA Summer League, Korkmaz scored 40 points against the Boston Celtics.

Furkan Korkmaz, the handsome hunk, is not married and is not dating anyone at the current moment. Moreover, there are no any rumors as well as records of his any affairs and relationships too. He is also active in social media but yet, Korkmaz hasn't shared photos of any girls. 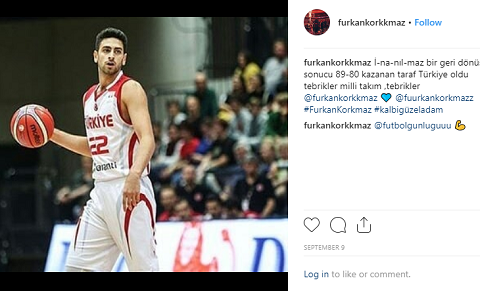 As Korkmaz is not married and is not dating anyone, his sexuality is straight. He hasn't done or said anything that makes people feel doubt about his sexuality. Well, Korkmaz might be focusing on his career rather than being involved in any kind of personal stuff.

Professional basketball player, Furkan Korkmah earns a tremendous amount of money from his career. As of 2018, the exact figure of the net worth of Korkmaz is still under review. However, Korkmaz receives an annual salary of $1,740,000 and carries the cap hit of $1,740,000 and a dead cap value of $1,740,000.