Fridolina Rolfo is a popular Swedish football player who currently plays for the Swedish national football team and also for the Frauen-Bundesliga club VFL Wolfsburg as their striker. Previously, she played for other clubs like Linkopings FC, Bayern Munich, and many more.

Winner of the 2012 UEFA U-19 Women's Championship and the silver medalist of the Summer Olympics Fridolina Rolfo is among the highest paid female footballers and her net worth is estimated above $2 million.

How Much Is Fridolina Rolfo Salary and Net Worth?

Fridolina is among the highest paid female footballers in the world and it is obvious that she earns very well since she has played for some of the reputed football clubs and also for her national team. So far Rolfo's net worth is estimated at around $2 million which she earned from her club and national team career.

Talking about her club career, she is earning quite well from the club. As of 2018, when she was playing for the Bayern Munich, her salary is listed around $200,000 annually. Currently, she is a member of the Frauen-Bundesliga club VFL Wolfsburg team from where she receives an annual salary in the range of her previous salary.

In addition to this, Fridolina currently signed an endorsement deal with the PUMA but the facts regarding the deal aren't yet disclosed. There aren't any facts available about her personal assets like cars and house.

Who Is Fridolina Rolfo's Boyfriend? Know about her Personal Life

Fridolina Rolfo is a gorgeous and beautiful athlete who is a footballer by profession and so far she is neither married nor engaged. The exact information regarding her current relationship is not yet disclosed but as we explore her official social account she is found with a man named Simon Skott.

Fridolina also shared a video on her official Instagram account stating that she is taking her girl to watch the game with her. Some of her fans commented to know whether she is her daughter but she hasn't confirmed anything yet.

She has shared several posts with him, one of which is their kissing photo and they have found to be traveling different places in vacation time. Fridolina's every post with Skott includes a love sign from which it can be said that she is in a love affair with him. 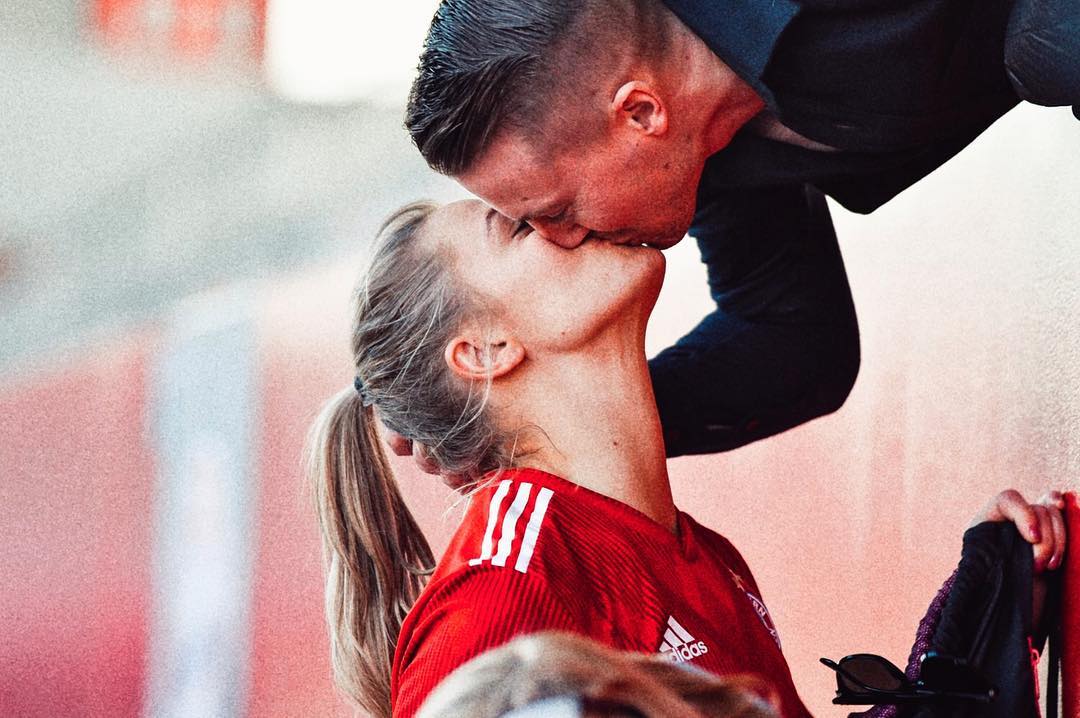 She hasn't mentioned him clearly as her boyfriend but after analyzing their bonding and closeness it is not wrong to guess they might be girlfriend-boyfriend. reportedly, there is no information disclosed about her past affairs or relationships.

Rolfo's social media account is full of posts related to her professional life and family life. She connects to her fans via her social media presence and she regularly updates about her games and other facts in her official social media.

Well unless she confirms her relationship status herself, it won't be fair to create rumors regarding her personal life.

Fridolina Rolfo is the Swedish national whose ethnicity is white and was born on 24 November 1993, in Kungsbacka, Sweden. She spent her childhood days with her parents and siblings.

Further information about her early life, educational qualifications are still under review.

Member of the Winner of the 2012 UEFA U-19 Women's Championship and the silver medalist of the Summer Olympics Fridolina started her career in 2008.

Fridolina Rolfo is a popular Swedish football player who currently plays for the Swedish national football team and also for the Frauen-Bundesliga club VFL Wolfsburg as their striker. Previously, she played for other clubs like Linkopings FC, Bayern Munich, and many more.

During her career with the Linkopings club, she scored a hat-trick in UEFA Women's Champions League. She is also in the World cup squad for the 2019 FIFA Women's World Cup with the Swedish national football team which is captained by Caroline Seger.

She is playing with the Swedish national team for a long time and some of her current teammates are Jonna Andersson, Magdalena Eriksson, and Amanda Ilestedt.