A very well-known personality in Russia, Fedor Smolov is one of the most popular football players. Smolov was born on Febuary 9, 1990, in Russia. The striker first started in 2007 and has been playing ever since, appearing in many international games for the country as well.

The striker has won many individual awards, such as the Russian player of the year for three consecutive times. His feats in the Russian world were amazing and still are. Discover more about Fedor Smolov's life. Biography, upbringing, affairs, and family.

Fedor (Fyodor) Smolov was born on Febuary 9, 1990, in Saratov, southwest Russia. Being the only child to his parents, Fedor was raised with great care. Mikhail and Irinia would carefully raise their son in the crime-ridden neighborhood they lived in, unaware of how great their son would be.

Fedor's father, Mikhail, had a great passion for soccer and wanted his son to have a promising career in football. Although he was interested in football, Fedor didn't want to play it in Saratov. He was aiming for something bigger, the national capital. CAPTION: Smolov with his father and mother  SOURCE: Instagram: @smolovfedor_10

Due to finance, many complications arose for Fedor, and he could not join his dream club to play. He was forced to play in Saratov (Sokol Saratov FC). Without a doubt, the youth could not play without having a heart for the game. Mikhail started to believe his son was not fit for football after Fedor failed his exams at 14.

Mikhail made a final attempt to convince his son to take up another examination, this time for a different club. Fedor passed the test for the Master Saturn club playing in the Moscow region. It was here that the youth finally started to show promise.

Height, Weight, and Other Personal Details

The striker is now well over his 20s and now entering his 30s. Fedor has a somewhat built body but topped it off with his height of 1.86 meters (6'1); he's now a person not to be messed with.

He's got brown eyes, brown hair, and a very handsome face. That's what Fedor Smolov is. A beautiful man with many fans after him. His shoe size is 10 U.S., and his dress size is 8 (U.S.). His zodiac sign is Aquarius.

Speaking of personalities and qualities, Fedor is unlikely to be always friendly. He is said to run away from emotional expressions and fears being limited. These qualities give a cold, temperamental feeling to him. He also dislikes broken promises and being lonely.

The star football player has more hobbies than just football. From his half-naked pictures alone, we can see Fedor enjoys tattoos. He got his first at 17, and it isn't possible to say how many he has over time.

Many gamers can now relate to a star football player like Fedor. The striker enjoys playing First person shooter games like Counter-Strike. His other hobbies include reading books and listening to music.

Fedor has also been supporting AC Milan ever since his childhood.

It is without a doubt that Fedor is a very handsome man. Good height, fair complexion, and a smile that grabs your heart. At least that's what happened to Victoria Lopyvera, the Miss Russia 2003 winner. While Victoria might have been older than Fedor, age wasn't a problem for the couple. Fedor Smolov and Victoria pose for a picture SOURCE: whosdatedwho.com

After meeting in 2012 at a party, the two instantly hit off and married the following year in the Maldives. Although not officially married according to Russian law, this beautiful couple kept their relationship for a few years. Unfortunately, it ended just a few years after their marriage in 2015, as the couple had conflicting opinions.

Victoria wanted to start a family, while Fedor wished to continue his football career. This created minor conflicts and, ultimately, a divorce. The divorce did not become a scandal as Irinia and Victoria were close, and the official marriage did not happen. Victoria still speaks well of her former husband to this day.

After reaching closure with Victoria, the heartbroken striker opened up a new chapter. Miranda Pin was a fashion model that paired well with Fedor. This relationship also did not last long, and they parted ways.

Fedor must have a thing for models as love sparked between him and another model Yulia Levchenko. The couple could be seen together in their social media pictures (now unavailable). Unfortunately, this also did not last. The latest spark for Fedor's relationship is Maria Yumasheva. Maria is a famous Russian personality and sportsperson born in 2002. The couple got engaged at a private ceremony in January 2020. It is said that Maria and Fedor live together.

Fedor is undoubtedly a millionaire with an estimated salary of around 50 thousand dollars per week. The millionaire striker is a big fan of BMW cars and has an estimated net worth of approximately 10 million dollars.

The striker started to show promise after being accepted by Master Saturn. He ended his career at Master Saturn at 16, having played for the club for a year.

The 16-year-old Footballer was then signed by Dynamo Moscow, where he started to show his true potential. Fedor made his debut in the Russian Premier League on April 28, 2007, as a last-minute substitute at 17. He would score many goals for the national junior team and the Dynamo U21 squad.

The next few years of Fedor's career would go on to play for many teams as a loan player. His career as a loan player landed him a few goals and assisted Sto his name from 2011-2015.

A Russian Premier League club Krasnodar, signed in the striker for four years as a contract. His debut for the team ended in a 1-0 victory over Amkar Perm. His debut was in June; his first goal was on August 6. Fedor's best play was on April 10, 2016, where he scored four goals in Krasodar's 6-0 landslide victory.

Fedor joined F.C. Lokomotiv Moscow on August 9, 2018. He scored goals against teams such as Real Madrid and Barcelona as a loan to Celta Vigo. 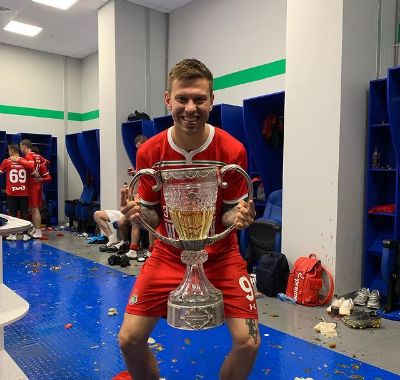 The striker finally came back to his former club Dynamo on January 2022 with a term contract of 1.5 years (additional +1 year)

Fedor Smolov was in the Russian U21 team for the 2011 European Championship. He became an essential pillar for the team scoring three goals in the playoffs against the Czech Republic.

Fedor was included in the Russian Football team debuting in a match against the U.S. and scoring a goal. He also scored a goal against Liechtenstein for Euro Cup 2016 in a 7-0 victory.