Facundo Torres is a famous football player from Montevideo, Uruguay, who currently plays for the Major League Soccer club Orlando City and is positioned as a Winger. Besides, he also plays for the Uruguay national team. Additionally, Torres wears a jersey number 17 for his fellow club.

Further on this, Torres is an Uruguayan professional footballer who has professionalism as a winger; however, he can also play as Second Striker and Right Winger. Furthermore, he is among the talented and versatile players who have been engaged in the football profession since his initial career.

Facundo Torres has an estimated net worth of more than $1.5 Million. Similarly, he has an annual salary of 953.2k while playing for Orlando City, SC. On the other hand, the recent updates revealed that Torres has a weekly wage of thousands of dollars which is still to get updated.

Currently, the player's market value is €7.00 million, which is also the highest market valuation of the player so far in his active career. The player signed an Orlando City SC on Jan 24, 2022, and he also must be earning a considerable sum of money from his endorsement partner Puma. Well, talking about the value of his asset, little is known about it at the moment, but we know that Toress owns several luxury cars, including Audi.

The handsome hunk footballer Toress is not single. Besides, he is currently dating his beautiful girlfriend, Avril Peon. The footballer is not so open about his relationship but has shared several photos on his social media handle that have gained much limelight in the past few years. 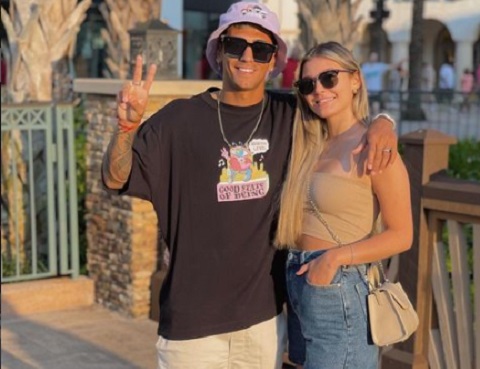 Additionally, we don't have any clue when they start dating, but as fans speculate, the couple has been together for many years and now. Furthermore, they have not dropped yet about their wedding and engagement plans. Talking about Avril, she is a supportive and caring partner of Toress, but we don't have much to say about her at this point.

Facundo began playing football at four, and as per the sources, he attended his first training session with his cousin Joaquin at Juventud River. Later at 10, he was selected to play in the National Championship final to represent the southern regional league in Melo.

Further to this, Torres was named in a senior matchday squad for the first time on Jun 7, 2018, and in 2020, he arrived at the club, Penarol. And two years later, the footballer joined the club Orlando City on a four-year Young Designated Player contract with the option for a fifth. Additionally, the sources reported the club's record $9 million fee.

Talking about his international career, the footballer began his career in the national team by representing the team on under-15, under-17, and under-20 levels. Additionally, Torres was part of the Uruguay squad at the 2015 South American U-15 Championship.

Have a look at: Agustin Canobbio

His Family And Personal Details Revealed

Facundo Torres was born on Apr 13, 2000, in his birthplace, Montevideo, Uruguay. Further, he holds Uruguayan nationality with a citizenship card. However, we have nothing much to talk about in his past career. Additionally, the footballer is silent about his family and siblings' facts.

Moreover, we have no clue whether he has siblings or not. As he is not so open about his family details and facts, it is much more challenging for us to talk about his personal life now.