Agustín Canobbio Graviz, professionally known as Agustín Canobbio, is an Uruguay descent professional football player. He is signed to the Brazil football cub Athletico Paranaense located in Curitiba, Parana, where he plays as a winger for the team. The footballer is also part of the Uruguay national team. Notably, with the Uruguay U 20 team, Austin Canobbio capped South America U2O Championship in 2017 in Ecuador.

The 2018 Supercopa Uruguayan winner Agustin has clinched several titles and champions in his winning profile. He has appeared for three football clubs, including Fenix, Penarol, and Athletico Paranaense. Agustin was 12 years old when Canobbio joined Centro Atletico Fenix's youth system for his amateur level in 2011. Despite his young age, he has consistently led his team in winning several games and trophies. His achievements include 2018, 2021 Uruguayan Premier League, 2018 Supercopa Uruguaya, etc.

Everything on Agustin Canobbio's early life and family details

Agustin Canobbio, the winger for Athletico Paranaense, was born with the family name Agustin Canobbio Graviz. He was born on October 1, 1998, in Montevideo, Uruguay, under the sun sign Libra. As of 2022, the Uruguay international age is just 23, and he is a right-footed player. The winger possesses an impressive height of 1.75m or 5 ft 9 inches and weighs over 72kg. Further description, Agustin has medium black hair. Also, he has a tattoo on the backside of his right leg. He was fortunate to be born in a sporty family where soccer was everyone's favorite. 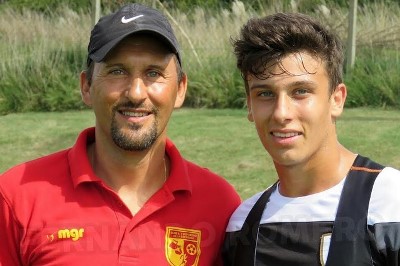 He was born to his father, Osvaldo Canobbio, a former professional football player who played forward. At the moment, Osvaldo is in the coaching line. He is currently coaching the Liverpool football  Club in Montevideo. His mother's name is Veronica Gravis. Both his father and mother are of Uruguay ancestry. In addition to that, the Cannobio family is a family of four. Not to mention that he is not the only son in his family.
Along with him, there are two siblings. One is his brother Joaco Canobbio, and another is his sister Valo Canobboi. Agustin's father significantly impacted his son's persuasion as a pro footballer. Agustin also followed his father's footprint; undoubtedly, his family has always been there for him through thick and thin.

Agustin's wherewithal and net worth

The winger Agustin Canobbio Graviz, 23, has been in this football line for over a decade. He didn't make a fair sum of money during his amateur career. He started making money after turning pro in 2016. So, to date, he must have credited his bank balance massively playing from the top clubs. When he signed a contract with Athletico Paranaense, he whopped an astronomical annual salary of £7,27,500, which means he earns £2021 weekly and £84 per hour.

For your extra knowledge, Carlos Eduardo tops the number spot with an annual salary of £7,80,000. Keep in mind that he is just 23 years of age, and at this early only, he has established himself very well. His estimated net worth in 2022 is approximately $1.5 million, including all his assets. For your information, Agustin also credits his bank balance from his national team wage. However, the accurate salary number he receives is yet to be disclosed. 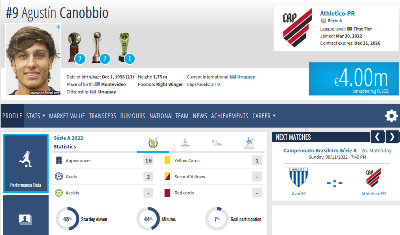 According to the value listed by Transfermarkt, Agustin Canobbio presently holds a market value of €4 million, which is his career highest. Also, Faro Sports is his agent who looks after his football-related task. Besides football, he is banding with Nike, which also welcomes him with a considerable fortune to his net worth. Not only that, but Nike also facilitates him with high-quality boots and kits. From the income from his career, he now lives a lavish lifestyle.

Also, read the net worth of Tyreek Magee

He is very suspenseful when it comes to relationship or love life topics. He loves to keep his private matter to himself only. He has barred his love life from the social media limelight. As of today, he has not been seen with any girl or company publicly; thus, determining his relationship status seems quite challenging. He is a good-looking individual, so queries regarding his love life are everyone's curiosity.

The most asked question about him is, Is he dating someone? Or who is Agustin's GF? So far, the proficient footballer has not officially announced anything about this, so he is assumed to be single. He is still in the early phase of his soccer, so he is devoted to growing his career and has no time for dating.

Agustin Canobbio, the 5 ft 9 inches tall winger, is handsome. He is explored mainly by his female fans. He is easily accessible on social media platforms like Instagram and Twitter. You may follow him on Instagram under the username @agus_cano7, which is officially verified with a blue tick. The player has 215K followers under that username.

His strong fan following has become very profitable as he never misses an opportunity to utilize it to earn a handsome amount of money from the brands and companies. He also promotes his sponsors and brands there. Through Instagram, he interacts with his fans and gives timely information about his soccer life.

Wiki review on his soccer career and stats

Agustín Canobbio Graviz, the Montevideo-born player, kicked off his soccer with the Fenix youth system in 2011 and played till 2016. He played for five years of his youth career at Fenix. Therefore, we can say he is the product of the Fenix Youth system. After his youth career there, he earned his promotion to the senior Fenix team in mid-2016. Agustin finally made his debut for Fenix on August 30, 2016, in the match against Cerro. In his debut season, he recorded a total of 14 league matches. In his two years there, Agustin made a total appearance of 41 games, adding three goals to his name. 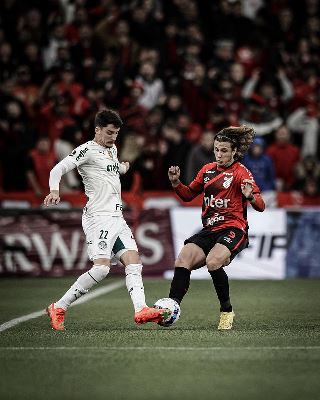 Likewise, for the 2018-19 season, he joined his fellow club Penarol and played in 58 games sending the ball three times behind the net. His time at Penarol was quite impressive. His performance there amazed everyone. Reportedly, for the 2020-21 and 2021-22 seasons, he moved back to his former Fenix in 2020, playing 22 games with three goals, and Penarol in 2021, appearing in 34 games with four goals, respectively. On March 30, 2022, he signed a four years deal with the Brazilian club Athletico Paranaense. At Parananse also, he is delivering impressive performance for the team. In the14 appearances, he has bagged two goals in his name. His contract with the club terminated on December 30,  2026.

Internationally, he initially represented his nation in 201. He was an Uruguay U20 youth international and played 21 games for the team. Also, he was part of the U-20 team when they won South American U-20 Championship in 2017, which happened in Ecuador. Notably, his debut game for the senior national team came in the match against Paraguay on January 27, 2022.