Sometimes it isn't the opposite that attracts, but similar people couple up. And such is the tale of Mary Beth Lycett and her husband, Kirby Smart. Kirby holds fame as the head coach of many teams throughout his career, but currently, Mary comes into the limelight as the wife of a head football coach. But like her husband, sports holds a special place in her heart.

In her youth, Mary played basketball for her school. However, Lycett would later stop playing the said sport. And even today, why she stopped playing remains unknown, but many people think Beth couldn't cut it as a professional.

Mary Beth Lycett likes to live out her life away from the media. However, as the wife of a famous coach, Mary's life does tend to come into the spotlight. Hate might be a bit too strong, but she dislikes her life in the noisy media. Lycett even keeps her Instagram private. Kirby Smart's wife also keeps her info from social media. Despite the fame she gained over the years, Mary remains elusive primarily to the world.

Mary Beth Lycett was the star of her Basketball team!

The former basketball athlete, Mary Beth Lycett, grew up in Georgia. Likewise, she played for her hometown and was her team's star. But at the start of her college, Lycett was on the bench most seasons.

But later, she landed a slot on the regular Bulldogs Women's Basketball roster. Beth played somewhere between 51 to 61 games for the University of Georgia. But she wasn't just good at sports; she also aced in studies.

Lycett graduated from UGA, but the year of her graduation stays hidden. Similarly, she earned a degree in finance. And before she went to college, Mary finished her high school education at Morrow High School.

Mary Beth Lycett and his husband, the NFL coach Kirby Smart held their wedding at St. James Methodist Church. Besides, the couple, Kirby and Mary, became bonded in holy matrimony in 2006. Likewise, only close friends and family attended Lycett's big day. And her sister Anne Lycett Toothaker was the maid of honor at the said wedding. 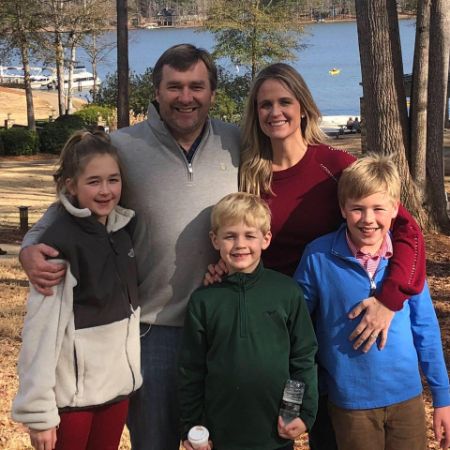 Mary Beth Lycett and her family took a picture near a lake. SOURCE: [email protected]

After the wedding, Mary took on her husband's last name. As such, all of her social media accounts hold the name Mary Beth Smart. Lycett became dragged into the limelight after her marriage. But throughout the years, she rarely appeared publicly with her spouse.

In their successful married life, Mary and Kirby welcomed three children. Their firstborn was a set of twins, Weston and Julia Smart. And then, the head coach and his wife gave birth to their youngest child, Andrew Smart.

Kirby and his wife keep their relationship before each other out of the limelight. So, Mary's ex-boyfriends all stay in the past and never come up. And similarly, Smart keeps his past affairs out of the picture. And even after so many years into their marriage, Beth and her partner stay deeply in love with each other.

Mary Beth Smart, a full-time mom and housewife, what's her net worth?

Mary Beth Smart, née Lycett, is a full-time mother and a housewife. As such, her assets come from her marriage. And so, Mary owns a guessed net worth of $10 million. Mary Beth Lycett posted a picture with her husband, Kirby Smart, and children in the outdoors. SOURCE: [email protected]

Given her degree in finance, it won't be hard for Mary to find a job. But for now, she dedicates her time as a mother and gives care to her little ones.

Lycett's husband, Kirby Smart, holds a massive fortune. And what's more, the NFL coach comes among the top five highest-paid coaches in 2022. Kirby earns $11.25 million a year as the head coach of the Georgia Bulldogs Football team. The second and first are Dabo Swinney with $11.5 million and Nick Saban with $11.7 million, respectively.

Despite owning such wealth, Mary and Kirby lead a low-key life. As such, much about the duo's properties and assets stay hidden. Similarly, the Smarts enjoy their wealth by spending them on their kids.