Dabo Swinney, born Nov 20, 1969, is the head coach at Clemson's Tigers, now entering his 14th season. He is the first coach in Clemson's history to lead the Tigers to multiple national championships. He played college football at Alabama and started his career with Alabama as a graduate assistant in 1993.

In 1995, Dabo Swinney first stepped into the managerial world when he became a full-time assistant coach for the Crimson Tide in charge of wide receivers and tight ends. Swinney then joined Clemson in 2003 where he emerged as one of the nation's top 25 recruiters in 2007.

Swinney's journey into head football coaching began when he was named interim chief mentor on October 13, 2008, for the Clemson's Tigers. In his first game as the interim head coach, the team lost to Georgia Tech 21-7. His first victory came after the Tigers defeated Boston College. Swinney led Clemson to compete for the bowl after the team triumphed over South Carolina. The Alabama native was formally named Clemson's 27th head coach on December 1, 2008. 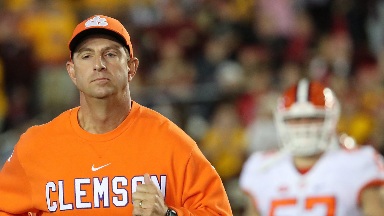 Under his guidance, Clemson was one of only 10 schools to be ranked in the top 20 of recruiting five years in a row. While Swinney was their head coach, Clemson Tigers came at #24 AP Top 25 final season ranking for the 2009 campaign. 2010 went rather disappointing for Swinney as in this edition the Clemson saw 6 losses; 6-6(4-4 in ACC), as well as a bowl loss to South Florida.

In 2011, Swinney won Tigers an ACC Championship and a trip to Orange Bowl. The coach himself ended up winning the Bobby Dodd Coach of the Year Award. The following year in 2012, Swinney gave Clemson its first 11 win season since the 1981 national championship year. The Tigers finished the year at 11-2 with Swinney being a finalist for the Liberty Mutual National Coach of the year - for the third time in his career. 2013 season Swinney led Clemson to their second BCS bowl bid, and their first-ever back-to-back 11 win seasons with the team finishing in the top 10 in both polls (#8 in AP, #7 in coaches). 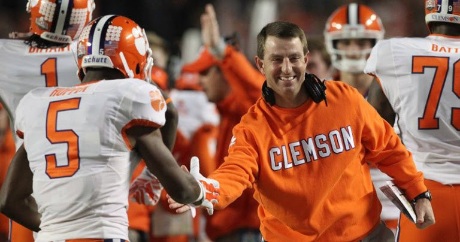 The Tigers finished 10-3 for the 2014 season and ranked 15th in both the AP and the Coaches Poll. 2015 brought Swinney's best season as Clemson's head coach, mentoring Tigers through their 14-1 record with an ACC championship and an appearance in the national championship game. Clemson consequently ranked themselves at #2 in both the Associated Press and Coaches Polls.

Swinney signed a 6-year contract extension with the Tigers in 2016. This season the coach gave the Tigers a 12-1 regular-season record and another ACC Championship. He also led the Tigers to a 35-31 comeback win over Alabama to secure the National Championship. In late 2017, Swinney got his 97th career win at Clemson after the team's 24-10 win over Georgia Tech.

Dabo Swinney was offered a multimillion-dollar contract extension after Clemson's Orange Bowl win in 2014. The contract at the time was offered to Swinney for 8 years, worth $27.15million (approx $3.15million per year), and was guaranteed wholly - given Swinney was to fire in the next three seasons. 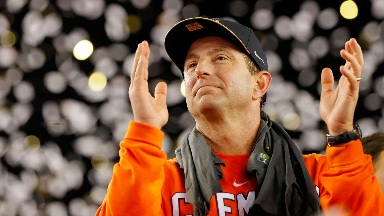 The agreement rose to 10-year, $93 million ($8.25 million as annual salary) in April 2019. This made him the highest-paid coach in the Atlantic Coast Conference. That year, Swinney took over the top spot in the annual coaches salary database, reported the ESPN. He made $9.3 million in total pay, surpassing Alabama's Nick Saban at $8.85 million.

Last year, on August 24, Greenville News reported that Swinney was to take a $687,500 pay cut due to cost-cutting measures resulting from the impacts of the Covid-19 pandemic on Clemson's finances. Greenville added that Swinney would make $7,562,500 after his pay reduction. A month later, USA Today Sports put forward a stat reporting that Swinney's total pay was $8,319,775 which was behind Saban, and Ed Orgeron from LSU. The source also revealed that the buyout of Swinney's contract was $50 million.

Sources claim that Dabo Swinney's net worth is around $20 million.

Dabo Swinney is married to Kathleen Bassett. The couple is Alabama alums and has known each other since first grade, reports Greenville. Kathleen said that she and her future husband liked each other from the very beginning and that they started dating in high school. 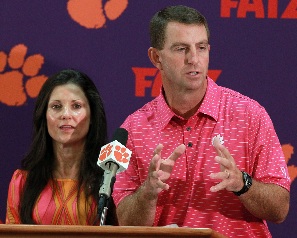 Dabo Swinney and his wife Kathleen Swinney knew each other since first grade. SOURCE: The Clemson Insider

Mrs. Swinney was a high school cheerleader at Pelham High School, in suburban Birmingham. She was also an elementary school teacher for four years. The Swinney couple currently resides in Crimson Tide's nemesis. Together, the pair shares three boys Clay, Drew, and Will, the latter who plays under his father at Clemson.

In 2016, the coach and her lady donated $1million to Clemson athletics as part of the IPTAY initiative which focused on several projects relating to football.