Brittany Horschel mostly holds her fame through her marriage. Furthermore, Horschel is a former golfer herself. And like a story, both Brittany and her husband Billy Horschel met while they played golf for the University of Florida. Besides, the duo, Brit and Billy, soon started dating after hitting off. Despite attaining the world's attention, the seven times PGA Tour winner's wife leads her life away from the limelight.

Although she enjoys her life away from the media, Brittany gained many followers on her social media. However, it wasn't always sunshine and rainbows for these golfers; find out about Brittany's demons below.

Brittany Horschel, the wife of Billy Horschel, is a recovered Alcoholic.

After his win at AT&T Byron Nelson, Billy Horschel spoke about issues in his home. His wife, Brittany Horschel, then took to Twitter and opened up about her demons. Furthermore, Brittany talked about her battle against her alcoholism. 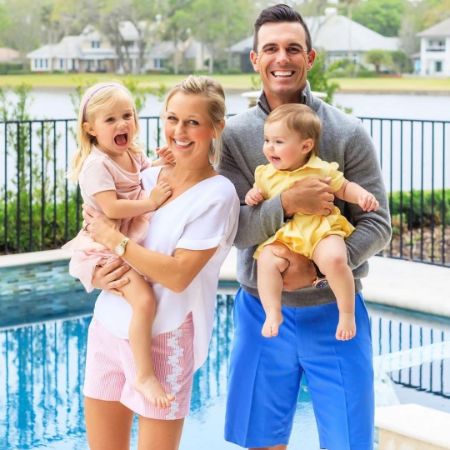 Brittany Horschel and Billy Horschel were carrying their kids for a picture. SOURCE: [email protected]_horschel

Brittany further stated in her Tweet that her husband went above and beyond to help his spouse. Likewise, Billy took it upon himself to take care of their youngest daughter, who was one and a half years old. The Golfer also moved them to their new house and competed in golf tournaments all at the same time,

And when the man won Byron Nelson, Billy's wife celebrated one year of sobriety. Brittany also stated how thankful she was that her husband stood by her in those trying times. And in those days, she rarely posted on her social media. The former golfer stayed away from the media as she started healing.

How rich are Billy Horschel and his wife, Brittany Horschel? Net Worth and Earning

Billy Horschel and his life partner, Brittany Horschel, accumulated a vast fortune. The American golfer currently holds an estimated net worth of $20 million. Similarly, his wife, Brittany, sits with an approximated asset of $5 million. Brittany Horschel and Billy Horschel celebrated a decade of their marriage in 2020. SOURCE: [email protected]_horschel

The seven-time PGA tour winner earned his money by bagging the prize money. Moreover, in 2022, Billy won the Memorial Tournament with four strokes. Again, Aaron Wise, a fellow American golfer, came as the runner-up. Horschel's win earned him the prize of $2.16 million.

The American golfer earned millions throughout his career, given Billy's track record. Likewise, he has won multiple tournaments over the past decade. His wins earned him at least $1.2 million annually.

And with such an amount in the bank, Brittany and Billy give their kids a luxury-filled life. Moreover, the married couple takes their children on trips around the globe with the money they earn. But, both Brittany and her husband keep their properties hidden from the public.

After beating her alcohol addiction, Brittany Horschel started to walk down the path of self-healing. And on her journey, Brittany found herself swinging the club once again. And on July 17th, 2021, Billy's wife bagged a win in Maroon Creek Club. 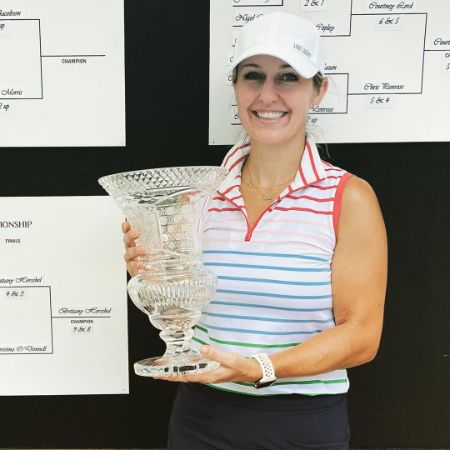 Brittany Horschel was holding her trophy, which she won at a golf tournament held in Maroon Creek Club. SOURCE: [email protected]_horschel

Although it might not be similar to her husband's, Brittany started playing golf again. Likewise, the Horschel duo include their kids in golfing as well. Billy's wife posted many pictures of her and the little ones enjoying golf.

When did Brittany and Billy Horschel Marry?

Brittany Horschel, née Nelson, and Billy Horschel tied the knot on November 10, 2010. Furthermore, Brittany and Billy exchanged their vows in a private setting away from the world. Billy and his wife exchanged their holy vows in the presence of their family and close friends. 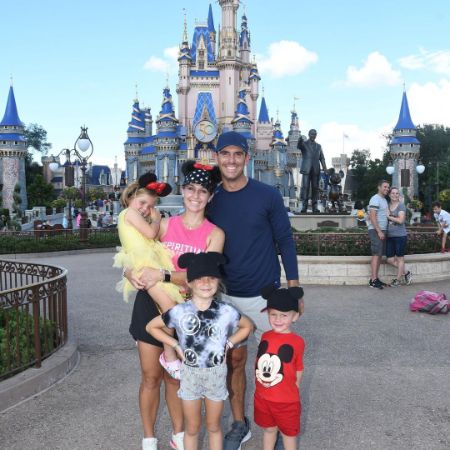 As we mentioned earlier, Brittany faced her demons and won. With the help and support of her loving husband, she overcame her alcoholism. Which shows how much love the Horschel couple holds for one another. Although the road was rocky for Brittany and Billy, they stayed together and beat the obstacles in their marriage.

Also, the duo remained free of extramarital affairs throughout their marriage. And even today, Billy and Brittany stay far away from rumors or news about their divorce.