Fabio Alexandre da Silva Coentrao or simply known as Fabio Coentrao is a professional player who plays primarily as a left back and occasionally as a defensive midfielder for Portugal National Team and Portuguese club, Sporting CP on a loan from Spanish La Liga side, Real Madrid CF.

Apart from playing for several European football clubs across the world, he has represented Portuguese in their youth sides and played at the 2010 FIFA World Cup and 2014 FIFA World Cup as well as UEFA Euro 2012 for Portugal.

Fabio Coentrao was born to mother, Josefina Coentrao, and father, Bernardino da Cruz Coentrao on March 11, 1988, at Vila do Conde, Portugal. He holds a Portuguese nationality. He has two brothers named Rui and Antonio.

His parents moved to France with his two brothers when he was 13 and he started living with his aunt.

He started playing from a very early age and joined the youth team of Portuguese football club, Rio Ave in 1999.

Fabio Coentrao’s Net worth and Salary

He used to earn a weekly salary of £58,000 for Real Madrid with yearly salary being about €3.5 million. Hence his net worth combined with his endorsing products like Nike could be in excess of $ 7 million. 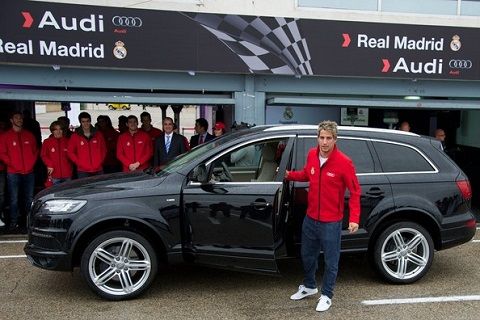 With his accumulated wealth he has purchased a luxurious home at Spain worth around $ 0.8 million and has a fleet of cars in his collection, prominent among them is his Audi Car Q7  which is priced at more than $ 60,000. Pior, he has other several other cars including Ferrari California.

He played for the main team of Rio Ave in 2005 to start his senior career, he played a hand in the club most crucial matches and was voted the Breakthrough Player of the Year.

Fabio was compared to Dutch winger, Arjen Robben by World Soccer Magazine in 2007.

He was then transferred to  SL Benfica in 2008 and was immediately loaned to clubs such as Nacional, Zaragoza and his old club, Rio Ave as from Benfica.

The Portuguese defender was able to win Portuguese Primeira Liga in 2009/10. His outstanding performances at Benefica a drew the attention Spanish La Liga club, Real Madrid CF whom he signed a six-year contract club deal worth €30 million in early July 2011.

Coentrao made his La Liga debut against Zaragoza on 28 August 2011 and scored his first La Liga goal for Madrid against RCD Espanyol on 16 December 2012.

Fabio Coentrao was part of the team along with French forward, Karim Benzema and  German midfielder,  Sami Khedira that won the UEFA Champions League in 2013. He was transferred as a part of a loan move to clubs,   French top tier football club, AS Monaco in 2015/16.

Fabio is currently playing for Portuguese professional club, Sporting CP for a season-long deal in 2017 as a loan from Madrid.

He has represented Portugal in the 2007 FIFA U-20 World Cup and made his international debut for Portuguese national senior team in 2009.

Fabio Coentrao scored his first international goal with a header against Luxembourg on 10 August 2011. He has made over 50 appearances for Portugal and scored 5 goals in the international football arena.

Currently 30, he stands at a height of 5 feet 11 inches tall and weighs about 72 kg. He is married to his wife Andreia Santos in 2010 and the couple is blessed with two children, son, Henrique Coentrao as well as a daughter, Victoria Coentrao.

Fabio Coentrao and Andreia first met each other while they both were attending someone's wedding anniversary. They got married at Fabio’s aunt’s house in 2010.