Fabian Schar is a Swiss professional footballer who is currently signed to the Premier League side Newcastle United as a center-back. A full international since 2016, he has been capped 67 times with 8 goals from Switzerland national team.

Wil, Switzerland native, Fabian Schar was born on 20th December 1991, under the star sign Sagittarius. He is the son of Marion Schar and Martin Schar. The thirty years old holds Swiss nationality. He stands 1.88 m (6 ft 2 in) tall.

His current net worth is $8 million.

Sorry Ladies!! Fabian Schar is off the market.

Newcastle United's Shirt No. 5 center-back is in a relationship with his girlfriend, Alexandar. On 10th July 2020, the couple celebrated their three years of togetherness. Schar shared the photo on IG and captioned it, "Special day Special place Beautiful Mykonos #3years." 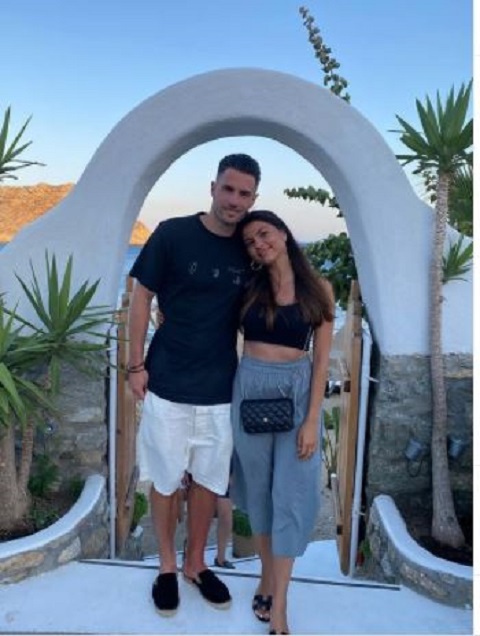 Schar is not shy to flaunt his love and often posts his girlfriend on his IG. Where his bae is a low-key person and also set her IG private.

On 4th July 2012, he joined  Basel on a three-year contract with the option of a fourth. On 29th September 2012, he made his Swiss Suoer League debut in a 1–1 away draw against Lausanne-Sport. His first goal for the club came on 7th October in the St. Jakob-Park during the 3–2 home victory over Servette.

With the team, he won the Swiss Super League season 2012–13 Championship and was runner up for the Swiss Cup. Further, Basel went to the semi-finals at the 2012-13 UEFA Europa League but was knocked out losing both matches and being beaten 2–5 on aggregate.

In the 2013-14 Swiss Super League Season, Basel won the league championship as well as reached the finals of the Swiss Cup but was defeated by Zurich in 2-0. That season, they reached the group stage and finished the group in the third position at Championship league and qualified for Europa League knockout phase and here they advanced as far as the quarter-finals.

In 2014-15, Basel won the championship for the sixth time in a row. In the Swiss Cup, Schar with the team reached the final.

On 4th June 2015, Schar was transfered to Hoffenheim.

Schar played for Switzerland U20, U21, and the Olympics.

In 2013, Schar was called by the Switzerland national team. On 6th September 2013, he scored his first goal for his national team in a 4–4 home draw against Iceland. Later 4 days, he had two more goals in a 2-0 away victory over Norway.

For the 2014 World Cup, Schar was named in Switzerland's squad and made his tournament debut in the team's third match, replacing the injured Steve von Bergen. Switzerland had a clean sheet in a 3-0 loss of Honduras.

Further, he was named to the national team for the 2018-19 UEFA Nations League in May 2019 and played in all two matches, finishing fourth.