Fabian Balbuena was born Fabian Cornelio Balbuena Gonzalez on August 23, 1991, in Ciudad del Este, Paraguay. He is the son of Lourdes Gonzalez and Cornelio Balbuena. Fabian did not continue his education after completing the primary level. Balbuena stands six feet and two inches tall and weighs 85 kg.

Fabian Balbuena's Net Worth in Millions Fabian earned £11,960 as his annual salary in the 2014 season while playing with C Nacional FC in the Paraguayan football league. His salary increased to £43,680 in 2015. The following season, Balbuena took home an amount of £275,600 while playing in Brasileirao. In 2019, His salary increased to £2,184,000 after signing a massive contract with West Ham United. Totaling his earnings until the 2022 season, It sums to more than £9 Million.

Fabian is very open about his relationship status. The football player is an active social media user and keeps sharing his personal information in his timeline. Balbuena exchanged his wedding vows with Adriana Duarte in December 2015 at a private wedding ceremony. 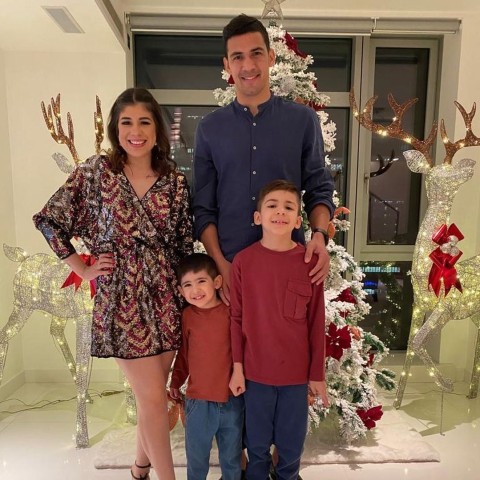 Fabian shares a photo with his wife and Children SOURCE: [email protected]

Shortly after the wedding, Fabian and Adriana welcomed their first child, a son. None of them have shared the name and birthdate of their children. The family of three extended to four with the birth of their second child. They live a happy married life, and there has been no rumor of the couple having ups and downs in married life.

Fabian started his football career playing at the Cerro Porteno PF's youth academy in Paraguay. He represented the club in numerous divisions and earned his senior team call in 2010. He became a regular player in the 2011 season and led the team as a caption. The player remained with the club until the 2012 season and moved to Rubio Nu.

The player played in his home country until the 2016 season and moved to Brazil and signed with Corinthians on a two-year contract. In early 2018, English Premier League, West Ham United, signed him for a three-year contract with an undisclosed fee. Fabian played with the club until the 2021 season and moved to Russia and joined Dynamo Moscow. Balbuena signed a four-year contract with FC Dynamo Moscow. He has appeared in twenty games and scored two goals while representing the club.