The central defender was ruled out for the 2020 season with a cruciate ligament tear and now tested positive with Covid-19. He becomes the first LaLiga player to test positive with the disease.

Signed to La Liga side Valencia CF, Ezequiel Garay has an annual salary of €5 million from the club. Professional since 2004, he has played for other leagues too and has made career earnings of millions. 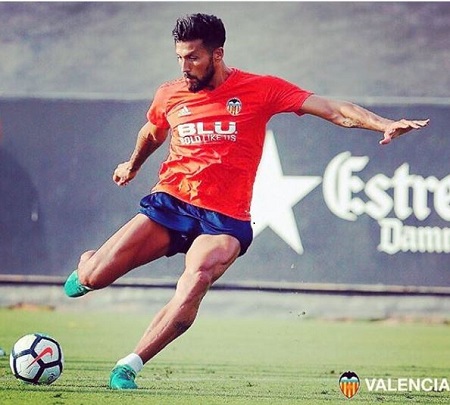 Besides his football career, he earns much from his endorsement deals with various brands, including Nike. As of 2020, his net worth is approximately $10 Million.

Shares Two Children With His Wife

Ezequiel Garay, 33, is a married man. The footballer tied the knot with his girlfriend, Tamara Gorro, on June 24, 2012, in Alcala de Henares, Spain. His spouse, Tamara, is a TV star, having first appeared on a dating show in 2010 who was named Miss Segovia in 2008. 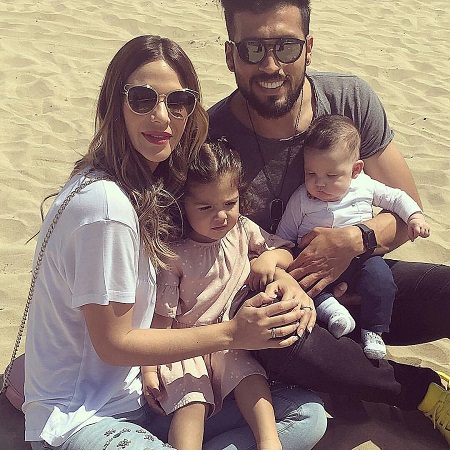 In 2014, the couple welcomed their daughter, Shaila Garay Gorro, while their son, Antonio Garay Gorro, was born in December 2017.

In 2018, Tamara posted a naked photo of her on top of a mountain wearing nothing at all, facing away from the camera to give fans a generous peek at her peachy bottom. The pictures garnered both positive and negative comments.

Valencia center-back Ezequiel Garay is the first player in LaLiga Santander to receive positive with Covid-19. The 33 years old revealed the news via his Instagram account, "I have tested positive for the coronavirus, I feel very well, and now it only remains to pay attention to the health authorities, for now, to be isolated." 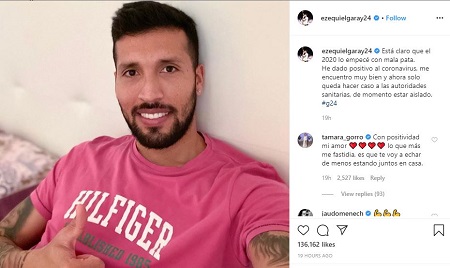 A couple of days ago, the entire Valencia team was tested for the coronavirus, and Garay is the only player to test with a positive test. The rest of his teammates and the coaching staff who have been in contact with him recently must remain in quarantine to prevent the virus from spreading.

Ezequiel Garay was born on 10 October 1986, in Rosario, Argentina, to Gregorio Garay and Miriam González. He has a younger brother, Benjamín Garay, 19, who currently plays side UD Melilla football team based in the autonomous city of Melilla.

Ezequiel Garay began his career with Newell's Old Boys. He later relocated to Spain at the age of 19, having La Liga totals of 184 games and 21 goals over nine seasons with Racing de Santander, Real Madrid, and Valencia.

In 2011 he signed with Benfica, winning four major titles. On 25 June 2014, he signed to Russian club FC Zenit Saint Petersburg where he played in 42 games across all competitions in his first season. On 31 August 2016, Garay arrived at Valencia.