Erik Jones was born Erik Benjamin Jones on May 30, 1996, in Byron, Michigan. He is among the two children born to Carol Jones and her husband, Dave Jones. Erik has a sister named Lindsey Jones. Jones graduated from Swartz Creek High School and received his High School diploma from Texas Motor Speedways.

Erik Jones Net Worth and Earnings

Erik Jones has an estimated net worth of more than $5 Million. He is very much early in his career and will be adding a huge net worth to his name in the future. Jones must be making a handsome amount from his sponsorship and advertising deals with Armour, DeWalt, Sports Benches, Simpson, GFPA, and a few more. 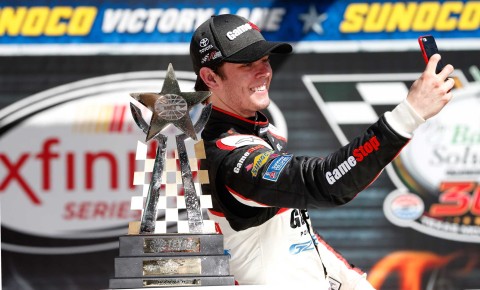 In 2014, Erik earned $95,002 while racing in three NASCAR Xfinity series. In 2015, Jones took home $544,501 as his prize money in the 2015 season after driving in three races in the NASCAR Cup Series. The same year, He earned $1,399,408 while racing in twenty-three games in the NASCAR Xfinity Series. The American racer was also part of the NASCAR Camping World Truck Series and had made $1,568,486 as his prize money in three seasons.

Since 2015, NASCAR has stopped publishing its driver's earnings and salary with the public. Jones must be making millions from his salary and prize money from the events.

Who is Erik Jones Dating? Know About His Girlfriend and Relationship Status

Erik is an active social media user but has successfully kept his love life out of social media. Jones is involved in a romantic relationship with his longtime girlfriend, Holly Shelton. The love birds have been together for more than three years. Although Erik rarely shares photos of the couple, Holly's timeline is filled with photos of the duo. 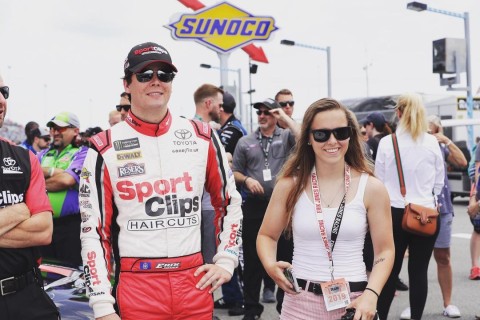 It's been more than three years of their relationship, Erik and Holly are yet to get engaged and walk down their wedding aisle. They must be waiting for the right time to get married.

Erik began his professional career in 2010, competing in ASA Late Model Series. The following year, He won the 2011 CRA All-Star Tour. In 2013, He joined the Kyle Busch Motorsports and won the Winchester 400 title. Jones became the youngest driver ever to win in the history of NASCAR's top-level competition to that time, winning the Lucas Oil 150.

In June 2014, Jones joined Joe Gibbs Racing and started to race in the Xfinity series. He won his first Xfinity race in the 2015 O'Reilly Auto Parts 300. In 2016, Erik won his first race at Bristol in April, holding off Kyle Larson and Kyle Busch on a late restart.  The American racer won his first NASCAR Cup Series title at the 2018 Coke Zero Sugar 400.