Eric Craig Staal a.k.a Eric Staal is a Canadian professional ice hockey player who is currently signed to the Minnesota Wild of the National Hockey League (NHL). He is the eldest of the Stall brothers, which includes former teammates Jared Stall, Jordan Stall, and Marc Staal.

Stall is a married man. He exchanged the vows with his long-time girlfriend, Tanya Van den Broeke on August 3, 2007.

However, the duo has not revealed much information about their love life. Also, they are inactive on Instagram and Twitter. 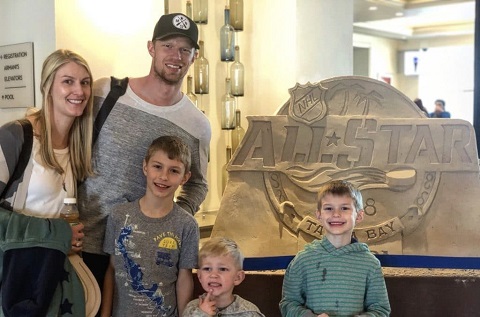 Furthermore, the couple is blessed with three sons, Parker, Levi, and Finley. The family currently resides in Edina, Minnesota.

Eric Staal was born on October 29, 1984, in Thunder Bay, Ontario, as the son of sod farmers Henry and Linda Staal.

At the tender age of four, he started playing hockey along with learning how to operate farming tools he played in a home ice rink alongside his three younger brothers: Jared Stall, Jordan Stall, and Marc Staal.

Growing up, he was much inspired by forwards Joe Sakic and Wayne Gretzky. Further, he took his jersey number 12 from what his father wore when he played hockey for the Lakehead Thunderwolves from 1978 to 1983.

Before his NHL draft, he played for Thunder Bay Kings Bantam AAA and Peterborough Petes.

In the 2003 NHL Entry Draft, Staal was picked second overall by the Carolina Hurricanes. He played 13 seasons for the Hurricanes. On February 28, 2016, he was traded to the New York Rangers in exchange for Aleksi Saarela and two second-round draft picks.

On July 1, 2016, he inked a three-year contract with the Minnesota Wild, as a free agent. He currently plays alongside Pontus Aberg, Jonas Brodin, and Joel Eriksson Ek.