Eric Paschall is an American college basketball player who is currently playing as forward for the Golden State Warriors of the National Basketball Association. He played college basketball for the Villanova Wildcats of the Big East Conference of NCAA Division 1. He was ranked as a top 100 high school recruit and completed his high school career from Dobbs Ferry High School.

NCAA Champion Eric Paschall declared for the 2019 NBA draft and was picked 41st overall in the second round by the States.

Eric Paschall was picked as 41st overall in the 2019 NBA Draft. As a second-round pick, he received a 3-year contract worth about $4.2 million with an annual average salary of around $1.4 million.

Eric Paschall is an American college basketball player and has played several college and national matches. Some of the trusted sites suggest Eric has an estimated net worth of around $350,000. Further, his average annual salary was estimated to be between $37,000 to $45,000.

So far Eric hasn't reported any endorsement deals and sponsorships.

Is Eric Paschall single or in a relationship? Know about his Personal Life

Eric Paschall hasn’t yet posted or mentioned anything over the internet so that his probable girlfriend would be guessed but in one of his Instagram post, he shared a photo with a girl mentionings her as a best friend and wrote that he loves her a lot.

Happy birthday to the most annoying bestfriend someone can have!! You almost 30!!!!!! I love you!! #brunchqueen

It seems that he doesn’t want to expose his private life in social media and remains far away from any types of controversies that may harm his emerging career in the field of basketball. It seems that Eric loves to spend time with his family as he often posts photos with his family members.

Eric Paschall is young, active and energetic player. He is an active social media user with thousands of followers.

Eric Paschall was born in North Tarrytown, New York on November 4, 1996, to the parents, Juan Eric Paschall and Cecelia Brooks-Paschal. He has three siblings, Ellen, Eudora, and Tia. Eric is an American by nationality and belongs to the mixed ethnic group.  Further, his star sign is Scorpio. 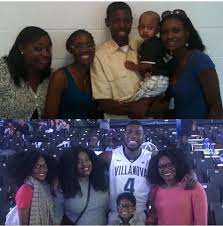 Eric started playing basketball at the early age of 12 and was a friend to Donovan Mitchell who is now an NBA player. As a junior, he was named state class B player of the year and Westchester County Mr. Basketball. He was then transferred to the St. Thomas More School as a senior.

He helped his school team to win National Prep School Championship title game. Eric played for Fordham and debuted with 10 rebounds and 31 points against New York Tech. he played several matches there before he opted to transfer to Villanova.

In the 2018 NCAA Tournament, he scored 14 points against West Virginia and made his team win. As a senior, Eric was named to the First- Team All-Big East