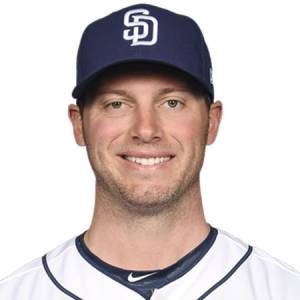 Robbie Erlin is an American professional Baseball player who plays in the Major League Baseball (MLB). Robbie Erlin currently plays for the San Diego Padres as their pitcher. In the third round of the 2009 MLB draft, the Texas Rangers selected Erlin.

Robbie Erlin reportedly earns around $1,450,000 as his yearly salary from San Diego Padres. Further, he has an estimated net worth of over $2 million.

Robbie Erlin's Net Worth in 2019? Know About His Career Earnings and Salary

Robbie Erlin's salary along with bonus and incentives are tabulated below.

Erlin endorses the shoes of Nike which suggests that he might be associated with the brand. However, Robbie hasn't revealed exact information about his association with Nike.

Is Robbie Erlin Married? Know About His Personal Life

According to the different sources, his relationship status is single. Also, there is no information about his probable girlfriend or wife in any news portals or sites or his own social accounts. However, he is alleged to be single but we really can't be sure about this.

Despite being a baseball player and a celebrity, he has managed to keep his private life low profiled. He also has not dropped much about his family. Not being a common name, it must be a tough job to keep both private and professional life apart and well managed. Also, he seems to be focused on his career which may be the one reason for his single status.

That one "great times with great people" post that everyone has... @nickvincent50 @jaclynvincent_ fun time on the lake with the best of friends

Besides that, he seems to love beaches and dwelling in nature. Also, he keeps posting nature pictures in his social accounts.

Talking about his body measurements, the famous MLB star is 1.80 m in height and weighs around 86 kg.

Robbie Erlin was born on October 8, 1990, in Oakland, California to father, Rick Erlin but the name of his mother is not available in the media. He is American by nationality and belongs to the White ethnic group. Further, his star sign is Libra.

Robbie attended Scotts Valley High School in California's Scotts Valley, where he played for the baseball team. He was named the Player of the Year of Santa Cruz County in 2009, his senior year. He committed to attending a baseball scholarship at California Polytechnic State University (Cal Poly).

In the third round of the 2009 MLB draft, the Texas Rangers selected Erlin. Robbie was placed to finish the 2011 season with the Double-A San Antonio Missions, where he had a six-starter ERA of 1.38.

On April 24, 2013, Robbie was promoted to the Major Leagues and made two relief appearances before returning to Tucson on May 2. Robbie was recalled against the Toronto Blue Jays on June 1 for his first start in the Major League. In that beginning, Erlin won his first career decision as the Padres defeated the Blue Jays, 4–3.