Eric Clemons is currently an American sportscaster associated with ESPN. He has worked for Fox Sports, BET in the past and served as a sports reporter and anchor for several local TV stations. Further, He has engaged himself in public speaking events for local schools, churches, and colleges in the performing arts.

The resident of United States, Eric Clemons, reportedly earns around in the range of $75,766, as his yearly salary from the network, and as of 2018, he reportedly has an estimated net worth of over six digit figure. He is currently married to his wife Renita McKay Clemons and has 2 children with her.

Eric Clemons was born on early November 1959 in Chicago, Illinois to a low-income family. He holds an American nationality and belongs to African ethnic group. Further, Eric has 2 older siblings and a large extended family.

Eric Clemons Net worth and Salary

Being one of the popular sportscasters in ESPN, Clemons has been earning a significant amount of salary from the network. Further, with all the experiences and skills he has managed to collect whopping net worth.

The American sportscaster/anchor Eric Clemons has an estimated net worth of six digit figure. As of 2018, the reporter receives an annual salary of $75,766 or more from his successful reporting career with ESPN. Further, ESPN reporter receives an added sum of money from his radio and TV guest appearances as a sports pundit too.

So with all the references, we came to the conclusion that he has been earning a significant amount of money and has been enjoying a lavish life with his family.

His career timeline along with his designation are enlisted below:

Further, Clemons was the leading producer of Night in the Blues at the Repertory Theater of New Brittany, designed and directed by Sheldon Epps in 2009. 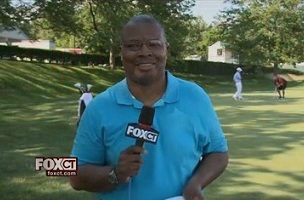 Some of his popular ESPN colleagues are Irv Brown, Louis Riddick, Roy Firestone and many more

As per his marital status, Eric is a married man and is currently married to his wife Renita McKay Clemons. His wife Renita grew up on the south side of Chicago and is a writer by profession.

The couple has been married for 30 years and additionally, the duo is parents of 2 children. His daughter, 28, is a graduate student in San Francisco, CA, and his son, 24, is a US Air Force member.