Emma Raducanu was born on November 13, 2002, in Toronto, Canada. She is the daughter of Renee Raducanu and her husband, Ian Raducanu. Both of her parents work as financial executives. Emma was born to a Romanian father and a Chinese mother, and she moved to the UK when she was just 2. Raducanu stands five feet and nine inches tall and weighs 60 kg. She completed her High School and recently completed her A-levels.

Emma Raducanu has an estimated net worth of more than $300,000. She has accumulated most of her net worth through her successful career as a tennis player. A tennis player does not need to win an event to earn their prize money; they are paid based on the round they reach. Also, they make millions from their sponsors and advertising deals. 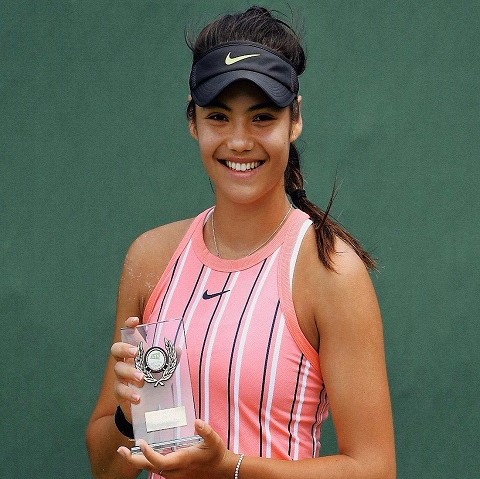 Emma shares a photo with her ITF title SOURCE: The Guardian

In early 2021, Emma secured sponsorship from Nike and Wilson and could aspire to emulate the best-paid players in the sport. Raducanu has an apparel and shoe sponsorship contract with Nike. The English tennis player took home more than £181,000 as her prize money from Wimbledon. Much about her net worth is still under the radar. Emma is very much early in her career and will be making millions in the future. Totaling her prize money from the tennis, it sums to $303,376.

Emma is believed to be single as of 2021. She is an active social media user, and her timeline is filled with photos of her games, training, family, and friends. Raducanu loves to spend her free time with her family and friends.  The British player is very much early in her career and must be focusing on her career.

Emma started playing tennis at the age of five. Her parents are the biggest supporter in her life. Either one of her parents manages to attend the game and cheer up. Raducanu turned professional in 2018 but struggled in her initial days before rising to fame in 2021. Emma made her WTA Tour main draw debut at the 2021 Nottingham Open through a wildcard entry.

Emma made her grand slam debut at the 2021 Wimbledon Championships and became the youngest British woman to reach the Wimbledon third round since Elena Baltacha in 2002. In August 2021, Raducanu lost her first WTA 125k finals against Clara Tauson at the WTA 125 Chicago. Emma has already won three ITF singles titles. She won her first ITF Single title in 2018 at the ITF TIberias.

Raducanu won her last ITF single title in December 2019. In July 2021, Emma reached the 4th Round in the 2021 Wimbledon before retiring in the second set of her fourth-round match against Ajla Tomljanovic due to breathing difficulty.