Elie Okobo is a French professional basketball player. He currently plays for the Northern Arizona Suns in an assignment from the Phoenix Suns of the National Basketball Association (NBA).

Okobo most often plays the position of a combo guard. Phoenix Suns drafted Okobo with the 31st pick in the 2018 NBA draft. Furthermore, Okobo has further played for the France national team including FIBA Europe Under-20 Championship.

Elie Okobo was born on 23rd October 1997, in Bordeaux, France. His father is a Congolese and mother French. Okobo grew up along with his three siblings, a sister, and two brothers. His older brother plays handball and further competes in field and track whereas his younger brother is also a basketball player.

Okobo belongs to a French nationality and holds African-American ethnicity. However, he hasn't revealed his educational background yet.

Initially, at the age of 16, Elie Okobo played for the JSA Bordeaux Basket of the Nationale Masculine 1 (NM1). Similarly, Okobo made his senior club debut on 8th February 2014. He played 2014–15 season for the Espoirs Pau-Lacq-Orthez and scored a season-high 24 points on 23rd December.

On 21st June 2018, Phoenix Suns drafted Okobo with the 31st pick in the 2018 NBA draft. He made his NBA debut on 17th October 2018 and made two points and an assist. However, Suns assigned him to the Northern Arizona Suns on 13th November. 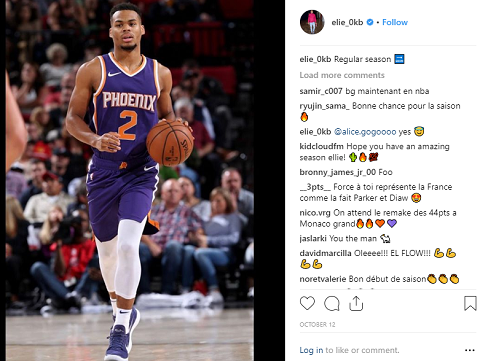 Okobo is active in social media such as Instagram and Twitter but yet, he hasn't shared photos of any girl. The sexual orientation of Okobo is straight. He hasn't done or said anything that makes us feel doubt regarding his sexuality. Okobo might be focusing on his career rather than being involved in any kind of personal stuff.

Elie Okobo Net worth and Salary

Currently, Elie Okobo has an estimated net worth of around $3 million. The professional basketball player Okobo earns a fortunate amount of money from his profession. Okobo currently plays for the Northern Arizona Suns and earns the salary of $1,238,464 per year.