Elias Ymer is a rising Swedishprfessional tennis player. He turned professional in 2014 and played under the APT and ITF tours. Ymer has already won the ATP Challenger title at the 2015 Citta di Caltanissetta. In 2016, Elias won his first APT doubles title and his brother Mikael Ymer at the Stockholm Open.

Elias Ymer was born on April 10, 1996, in Skara, Sweden. He is among the three children born to Kelemeork Elias Yigletu and her husband, Yemer Wondwoesen. His mother works as a physician, and his father works for a dairy company. He has two brothers named Mikael and Rafael. Elias is born to Ethiopian immigrant parents. Ymer stands five feet and eleven inches tall and weighs 78 kg.

Elias Ymer has an estimated net worth of more than $1 Million. He is very much early in his career and earned a reasonable sum to his career. A tennis player makes as per the round they reach in a single event rather than winning an event. In 2021, Elias has already earned $122,329 while appearing in more than ten events. 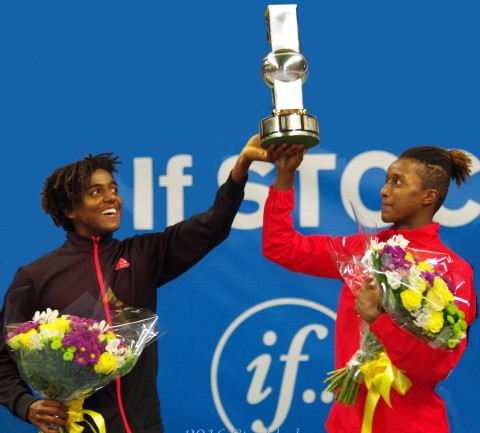 Elias brother Mikael possess similar earning in his professional career. He has earned $1,290,511 to data. In the ongoing season of 2021, Mikael has made $442,708 from almost fifty matches. Mikael has a sponsorship deal with Adidas and Babolat.

Elias started playing tennis along with his brother from a very early age. His father was a marathon runner in his early days and inherited the athletic genes from his father. He made his ATP main draw singles debut at the 2013 Swedish Open. Ymer made his professional debut in 2014 and reached a wildcard at the 2014 Swedish Open.

Ymer has won eleven Single titles at the ATP Challengers and ITF Futures. In June 2018, He ranked no.105 in single, which is his highest ranking to date. In 2018, Elias won the Pune Challenger Title.

Ymer is very much early in his career. He is believed to be single as of 2021. Elias has not shared a word about his love life and relationship history. He must be focused on making his career rather than spending time with people. His timeline is filled with photos of his games and his family.