Amanda Anisimova is a rising American professional tennis player. She started her professional career in 2016 at the age of fourteen. Amanda is the third-youngest player ranked in the top 100 by the Women's Tennis Association. Anisimova won her only career title at the Copa Colsanitas in April 2019 at the age of 17. Amanda won the 2017 US Open girls' singles title as an amateur.

Amanda Anisimova was born on August 31, 2001, in Freehold, New Jersey. She is among the two children born to Konstantin Anisimov and his wife, Olga Anisimova. Both of her parents worked in the finance and banking industries. She has an elder sister, Marie Egee, who played college tennis for the University of Pennsylvania. Amanda stands five feet and eleven inches tall and weighs 59 kg.

Amanda Anisimova has an estimated net worth of more than $2 Million. As per sources, Amanda has signed an endorsement contract that could be worth more than $70 million with the Sports giant Nike. The contract ranks among the largest ever signed by a teenager. The tennis player must be receiving a hefty amount through numerous such deals and contracts. In the ongoing season of 2021, Amanda has earned $172,881 from matches. 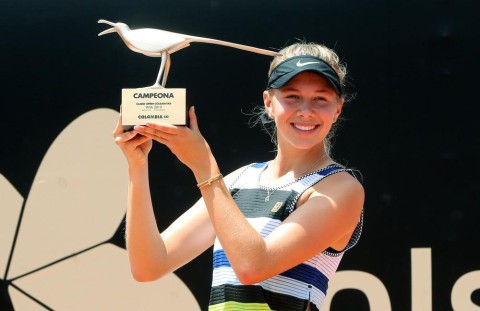 Amanda shares a photo with her WTA Title SOURCE: WTA

Amanda is involved in a romantic relationship with her longtime boyfriend, Tyler Roos. The love birds have been seeing each other for more than a year. Both of them are active social media users and keep sharing many pictures of their holiday vacations around the globe. They have not shared their first meeting experience with the public.

Amanda won her first amateur title in 2015 at the Abierto Juvenil Mexicano. The following year, She won the Grade 1 Yucatán Cup. Anisimova made her professional debut in the US Open Qualifying but could not make it to the tournament. In 2017, Amanda got a wild card into the Miami Open but last in her first game against Taylor Townsend. She became the youngest player to participate in the French Open.

Amanda made her breakthrough in 2018 when she became the youngest player to reach the fourth round in the Indian Wells Open. At the end of the season, She was ranked in the top 100 for the first time. In early 2019, Anisimova reached the fourth round of the Australian Open. The American tennis player won the Copa Colsanitas and then reached the semi-final in the French Open before losing to Ashleigh Barty.  Nonetheless, Anisimova reached as high as No. 21 in the world near the end of the season.

In 2020, Amanda reached the semifinal at the WTA Auckland Open and lost to Serena Williams. Anisimova teamed up with Nick Kyrgios for the mixed doubles at the Australian Open but lost in the way.