Ederson Santana de Moraes, well recognized as Ederson is a professional footballer who is currently signed to the Premier League side Manchester City as well as the Brazilian national team. Considered regarded as one of the best goalkeepers in the world, he earlier played for Benfica (2015-2017), and Rio Ave (2012-2015). Also, the goalkeeper holds the Guinness World Record for Longest Football Drop Kick.

How Much Is Ederson's Net Worth In 2021? Salary & Contract

Man City star Ederson is married to the stunning Lais Moraes. The pair got together in 2013, and inseparable ever since.

At the time couple met, Ederson was at Rio Ave. The religious footballer, who has inked 'I belong to Jesus' across his chest', exchanged the wedding vows in April 2014, aged 21. 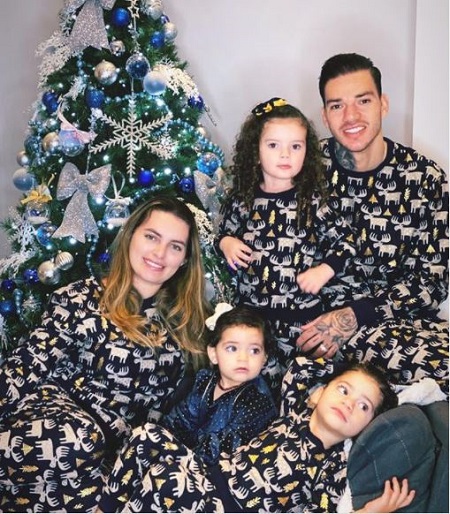 Later, the couple moved to Lisbon following the goalkeeper returned to Benfica and then to Manchester. Ederson's wifey Lais often visti during match to cheer for his man.

On 6th June 2017, they welcomed their first child, baby girl, Yasmin Moraes. On 13th September 2018, they had son in their family, named Henrique Moraes. On 17th January 2020, their second daughter, Laura Moraes was born. Their adorable family pictures are found on Ederson's IG.

Ederson started his football career with the Sao Paulo youth team in 2008 and joined Portuguese side Benfica one year later, where he would spend two seasons.

In 2012, he transferred to  Primeira Liga's side Rio Ave senior team and became a regular starter there. In 2015, he re-joined Benfica where he would win four major titles in two seasons.

For the 2017–18 season, Ederson moved to  English club Manchester City for £35 million, becoming the most expensive goalkeeper of all time. He went on to win the Premier League and EFL Cup in his first season in England and won a domestic treble the following season.

At the international level, he made his debut in 2017 after previously being capped at under-23 level. For the 2018 World Cup, he was named to the national team squad as well as won the  2019 Copa America.