Douglas Lee Williams a.k.a. Doug Williams is an American football executive and retired quarterback and coach. He is well recognized for his performance with the Washington Redskins in Super Bowl XXII against the Denver Broncos, where he earned Super Bowl MVP after passing for 340 yards and 4 touchdowns, making him the first black quarterback to both start and win a Super Bowl. The 1978 NFL draftee played for Tampa Bay Buccaneers (1978–1982), Oklahoma/Arizona Outlaws (1984–1985), and Washington Redskins (1986–1989). After retirement, he started coaching, most notably serving as the head coach of the Grambling State Tigers. Currently, Williams is Senior adviser at Washington Football Team.

Zachary, Louisiana native, Doug William was born on 9th August 1955, under the star sign Leo. The sixty-six years old is an American by nationality who came from the Afro-American ethnic background.

How Much Is Doug Williams Net Worth In 2022?

Following his departure from the NFL, he served and later moved to the coaching field. He was a head coach at Pointe Coupee Central High School, Northeast High School, Morehouse College, and Grambling State University. 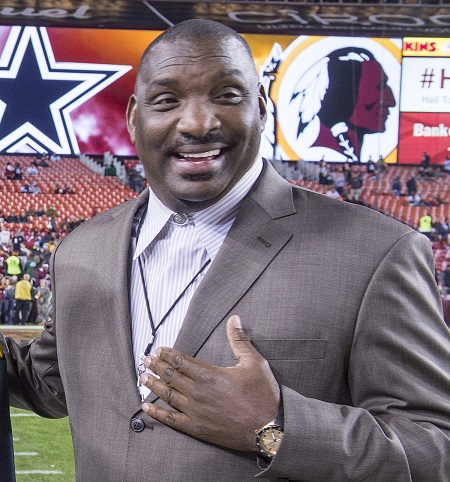 Doug Williams, posing for a photo on December 7, 2015, during a football game with the Dallas Cowboys. SOURCE: Wikipedia

Earlier, Doug served as the executive at the Washington football team of the NFL. According to the source, the National Football League (NFL) executive compensation is between $180,000-$400,000 per annum.

Doug Williams' Wife: Is He Married?

Doug has married twice. He first tied the knot with Janice Goss in 1982. The two divorced the following year. After that, William married to Raunda. They share eight children: Laura, Lee, Ashley, Adrian, Doug, Jr., Jasmine, Temessia, and Carmaleta. 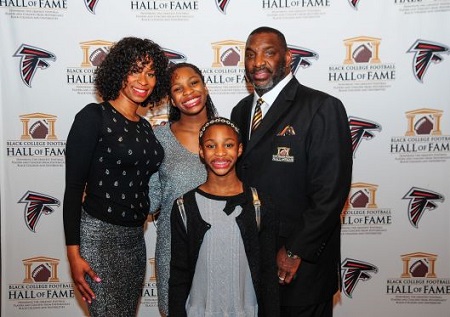 Their sons Adrian played basketball for Brown University until graduating after the 2010–11 season while Doug Jr. (D.J.) signed to play for his father at Grambling State University.

Doug was born to Robert Williams and Laura Williams. He has a younger brother, Mike Williams, also a former American football wide receiver who played in the National Football League

Doug did his high schooling at Northeast High School (Louisiana). He enrolled at Grambling State University where he played under head coach Eddie Robinson. He graduated with a bachelor's degree in education, and he began work on his master's degree before the 1978 NFL Draft.