Dorian Thompson-Robinson is a rising American college football player. He is currently playing in the Pac-12 Conference for the UCLA Bruins. Dorian was named into the Second-team All-Pac-12. Robinson plays as a quarterback for his team.

Dorian Thompson-Robinson was born Dorian Trevor Thompson-Robinson on November 14, 1999, in Columbia, South Carolina. He is the son of Michael Robinson and his wife, Dr.Melva Thompson-Robinson. His mother is a community health professor at UNLV. Robinson has one brother and one sister. After graduating from Bishop Gorman High School, Dorian enrolled at UCLA. Talking about his physical appearance, He stands six feet and one inch tall and weighs 93 kg.

Dorian started playing football in middle school. He played numerous sports in his high school days but committed to playing American football in his junior year. Robinson passed for 3,275 passing yards, 38 touchdowns and rushed for 426 yards and seven touchdowns in his senior year. After graduating from High School, He received numerous offers from universities but chose to play for the University of California, Los Angeles. 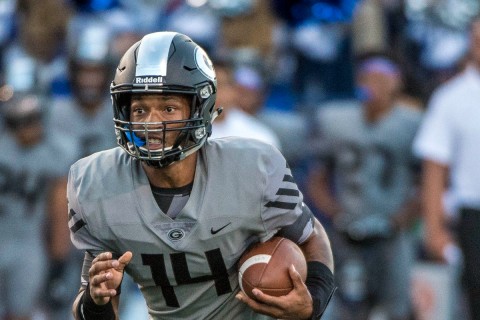 Dorian rushes towards the goal line in a game SOURCE: Bruins Nation

The player played ten games in his freshman year, passed 1,311 yards, and had seven touchdowns. He spent his early days as an offensive snap. Dorian took the role of a quarterback from the starting of the 2019 season of sophomore. He started 11 of the 12 games that season. Robinson missed the Oregon State game with an injury but finished the season with 2,701 passing yards and 21 touchdowns and ranked tenth all-time in a single season for a UCLA player.

In his junior season, Dorian became a regular player for the UCLA Bruins and played as a starting quarterback, which was delayed and shortened by the COVID-19 pandemic. Statistically, Thompson-Robinson saw a significant improvement over his sophomore season. At the end of the season, He earned his spot in the second-team All-Pac-12. Many experts believed him to list his name for the 2021 NFL, but Dorian returned to UCLA for the 2021 season.

Dorian is an active social media user and very much open about his relationship status. As per sources, Thompson-Robinson is involved in a romantic relationship with a girl. However, He has not shared a word about her. They have been dating each other since High School and have not shared their first meeting experience. Both of them seem to be very much supportive of each other.

Dorian Thompson-Robinson is among the rising prospect for the 2022 NFL draft. He was set to list his name for the 2021 NFL draft but decided to continue his education at the last moment.  Dorian will surely be landing a massive contract in the upcoming draft. As per the NCAA rules, Universities do not pay their players; instead, they offer them scholarships to help them cover most of their expenses.