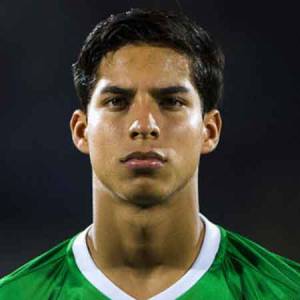 Diego Lainez is a Mexican professional footballer who plays for the Spanish club Real Betis. Previously, he played for the senior and junior team of the club America from 2012 until 2019. He is growing to be a highly valued player of the team and is likely to be given huge contract offers by other clubs in the future.

Lainez plays the position of Winger. He is described as a diminutive, left-footed forward with a sharp burst of pace.

Diego Lainez Salary and Net worth

The young footballer Diego Lainez's net worth at present remains unknown. In the short time of his career as a professional career, he has grown to become one of the rising football stars. His current value at transfer market is £1.35 million.

Recently, he signed to Real Betis, however, his current salary contracts with the team have not been disclosed.

According to the source, the average Real Betis footballers salary for 2017million-per-annum, (approximately €19,230 per-week)- the tenth highest average wages in the La Liga. Hence, he is estimated to make an annual salary no less than the six digit figure.

Besides, he earns a decent sum through endorsements deal. Further, he is an ambassador for LAB Series, a skin care for men.

Diego Lainez is currently 18 years of age and possibly single. There is no information about his personal life but he has not been seen with any girl which suggests that he does not have a girlfriend at the moment. He is focused in his career at the moment and has been for a very long time.

Diego Lainez Levya was born on 9 June 2000, in Villahermosa, Tabasco, Mexico. He is the son of Mauro Lainez and Mary del Carmen Leyva. Growing up he had a brother who is also a footballer.

During his youth years, he was recruited by scout Angel Gonzalez along with his brother. His brother went to Pachuca's academy while Diego chose Club America.

On 4 August 2018, America faced against Estadio Hidalgo. In the match, Lainez was able to score his first two goals for America and became the youngest player in franchise history to score a double and fifth youngest to score a goal. He continued to make appearances throughout the season but had to miss four weeks of play due to a sprained ankle caused due to a tackle from Bruno Valdez.

Aside from Diego Lainez's career in Club America, he has also been part of Mexico's national team. He was in the final roster of the 2017 FIFA U-17 World Cup. He scored two goals against England in Mexico's second group match which ended in a loss for Mexico with a score of 3-2.

Diego Lainez was called up for the 2018 CONCACAF U-20 Championship and also the U-21 Mexico national team that participated at the 2018 Toulon Tournament. Lainez won the Best Player Award at the tournament and was the Best XI of the competition as Mexico finished runner-up. He also appeared in all three group stage matches in the 2018 Central American and Carribean Games.