Diego Ferney Chara Zamora widely recognized as Diego Chara is a Colombian born American footballer who is currently signed to the MLS side Portland Timbers. He plays as a defensive midfielder and is known for his feisty play. He made his professional debut in 2004 with Deportes Quindio. Later, he played for America de Cali and Deportes Tolima before arriving at Portland.

How Much Is Diego Chara's Net Worth? Know His Salary & Market Value

Diego Chara's salary for the 2020 season from the Portland Timbers is $550,000. From the team roosters such as Diego Valeri and Sebastian Blanco are known to be the highest-paid roosters.

Currently, his market value is reported €400,000 last updated on 8th April 2020. Besides, his endorsed by Nike and often seen promoting the brand on his IG. As of 2020, his net worth is approximately $1.5 million.

Diego is married to wifey, Sindy Chara. Nevertheless, the couple is yet to come out with their love story such as their dating phase to getting married. In October 2020, Chara and his spouse welcomed twins: Diego and Angel to their family. Before, they already had two daughters, Mariajose and Allison. Diego's socials is full of his beautiful family picture. 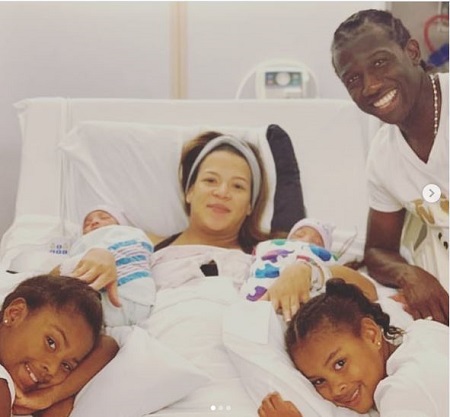 To date, there is no rumors regarding the extra-marital affair, conflict, and divorce in their marital relationship. The couple is living a blissful life.

Diego Chara was born to Jesus Zamora, who played also played football. He was raised alongside his elder brother, Felipe Chara, and younger brother, Yimmi Chara: both are professional footballers. As of now, his younger brother also plays for the Portland Timbers, after signing on 2nd January 2020.

In August 2019, U.S. Government granted Chara a U.S. Citizen, before that, he held a green card.

Started through the youth system at Deportes Quindio, Chara was moved u to the senior side in 2004. For the team, he played overall 124 games and scored 2 goals. Further, he played the 2009 season for the America de Cali, making a competitive appearance in 31 games with a goal.

The following season, he joined Deportes Tolima where he led the team to the quarterfinal of the 2010 Copa Sudamericana. In 2011, the team qualify to the 2011 Copa Libertadores.

In April 2011, Chara signed ti the Portland, becoming the club's first Designated Player. His first MLS goal came on 20th August 2011 in a home match against Cascadia Cup rivals Vancouver Whitecaps FC, which broke the record of the fastest MLS goal for the team.