Diego Hernan Valeri is an Argentine professional footballer who plays in the Major League Soccer (MLS) side Portland Timbers. A professional since 2003, he played for Lanus (2003-2013) and on-loan Porto (2009-2010) and Almeria (2010). He played on the Lanus team that won Argentina's 2007 Apertura as well as the Porto team that won the 2009–10 Portuguese Cup.

Lanus, Buenos Aires native, Diego Valeri was born on 1st May 1986, under the star sign Taurus. The thirty-four years old holds a Argentine nationality. He holds a U.S. green card which qualifies him as a domestic player for MLS roster purposes.

How Much Is Diego Valeri's Net Worth In 2020? Know His Salary & Market Value

Portland Timbers' attacking midfielder Diego Valeri is the 9th highest paid rooster with an annual salary of $2.41 million as of 2020. Javier Hernandez, Michael Bradly, and Jozy Altidore are the top three on the list.

Diego Valeri is married to Florencia Valeri. The couple exchanged the vows in 2007, in an intimate ceremony. A matter of fact, the duo has shared less to no information about their love life. Though his wife and daughter often spotted during matches and events, they remain silent in the socials. 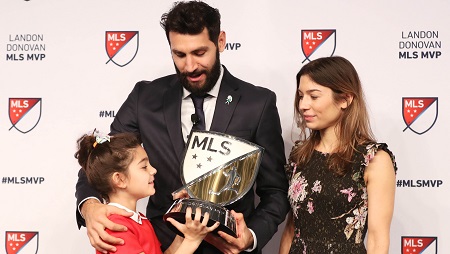 Besides, there is no news and rumors of an extra-marital affair, conflict, and divorce in their marital relationship. For sure, the couple is living a blissful life.

Portland, Oregon resident, Diego Valeri is the son of Luis and Monica Valeri. Diego grew up playing football as a rite of passage in his birthplace of Lanus. A matter of fact, he followed in the father's footsteps who also had been a talented player, but his grandfather coaxed him to become a farmer, and later the owner of a shoe factory, rather than pursue a career in the sport.

When Valeri was nine years old, his mother who played tennis for Argentine sports club Lanus, took him to a tryout for the hometown team and the rest is history.

On 27th September 2003, Valeri made his first-team debut for Lanus in a 1-1 draw with Velez Sarsfield. During his Lanus stint, he has loan spells with Porto, Almeria, and Portland Timbers. Overall, he played 151 games as well as scored 26 goals until 2013.

On 6th August 2012, Portland exercised its option with Lanus. On 6th August 2014, he was part of the MLS All-Star Team that won against German Bundesliga title winner and recent European Champions League winner Bayern Munich.

On 10th August 2015, he signed a three-year extension contract. During 2017, regular season, he was awarded the Landon Donovan MLS MVP Award as the league's most valuable player.