Lila Diane Sawyer is a famous American television journalist currently associated with ABC News. Known for her appearance on ABC World News, Lila Diane Sawyer worked for the show since January 2010. She left her position as anchor at ABC World News in September 2014 and she will be focusing on creating specials and will be conducting high profile interviews.

The resident of New York City, Lila Diane Sawyer, reportedly has an estimated net worth of over $ 80 million. She was married to Mike Nichols on April 29, 1988. Sadly her husband passed away on November 19, 2014, at the age of 83.

Diane Sawyer was born on December 22, 1945, in Glasgow, Kentucky, U.S. to Tom Sawyer and Jean W. Sawyer. She holds an American nationality and belongs to the White ethnic group.

Diane Sawyer after graduating from Seneca High School in Louisville joined the Wellesley College and acquired her Bachelor's degree in Major English.

Diane Sawyer started her career as a weather forecaster for WLKY-TV In Louisville. In 1970, she left WLKY-TV and headed to Washington, D.C. and when she didn’t find work in the broadcast industry she became an assistant to Jerry Warren the White House deputy press secretary.

After some time Sawyer became an administrative assistant of Ron Ziegler and then promoted to post of staff assistant for U.S. President Richard Nixon. She was blamed for sharing classified information to journalists during the Watergate scandal but she denied the charges.

After returning to Washington, D.C. she started working as a general assignment reporter in CBS News. She was promoted to political correspondent and later on as co-anchor. She stayed with CBS News from 1982 to 1984.

Tune in tonight with this guy

In 1984 she started working for the show named 60 minutes and the program was listed as one among the top-five most-watched program in the country. In 1989, she became co-anchor on Primetime Live newsmagazine of ABC News and she also co-anchored ABC’s show 20/20.

Diane Sawyer started working for Good America America on January  18, 1999, and she worked in that program for almost eleven years. In 2000 she became co-anchor of Primetime newsmagazine she worked in it until end of 2006. 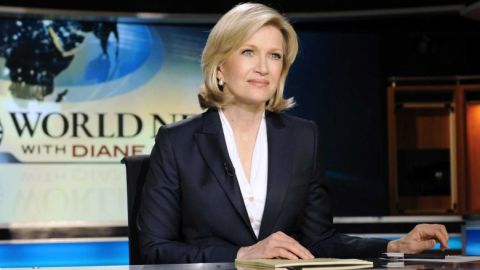 On December 21, 2009, She joined ABC News and started working as ABC World News anchor. The channels rating raised by 8% after her joining ABC News. She stayed with ABC News as an anchor for nearly 5 years.

Diane Sawyer Net worth and Salary

The American television journalist Diane Sawyer has an estimated net worth of $ 80 million. While she was working on ABC News her estimated salary is around 100k to 110k per year. She also has a very beautiful house in New York which she is planning to sell for $ 4.6 million. The house is situated in a property of 1.9 acres.

Diane Sawyer married Mike Nichols on April 29, 1988, who is an actor, director, and producer of film and theatre. The couple had no children but Nichols was a father to a son and two daughters from previous marriages. Nichols died at the age of  83 on November 19, 2014.

Diane Sawyer is very active on social media and has a huge fan follower with 876k followers on Twitter and 70.3k followers on Instagram.