An American football quarterback, Derek Matthew Anderson, commonly known as Derek Anderson is currently playing for the Buffalo Bills of the National Football League (NFL). The quarterback was drafted in the 6th round of the 2005 NFL Draft by Baltimore Ravens. He has also played for the renowned clubs including the Cleveland Browns, Arizona Cardinals, and Carolina Panthers. Anderson played college football for the Oregon States and High school football for Scappoose. He currently has an estimated net worth of $6 million.

Derek Anderson is currently married to his girlfriend turned wife Lisa as of 2019. So let's take a detailed look at his salary-net worth, personal life, career highlights, and stats right here.

A renowned free agent football quarterback, Anderson has an estimated net worth is around $6 million. Anderson amassed his wealth widely through his professional football career in the NFL for more than eleven years.

Added that, he also receives a good sum of money from his various endorsement deals.

Derek Anderson, 34, has married twice. He first tied the knot with his girlfriend named Lisa who grew up with him. However, their relationship did not last long as the couple parted way and divorced.

In 2013, Anderson exchanged the wedding vows with Mallory Anderson. 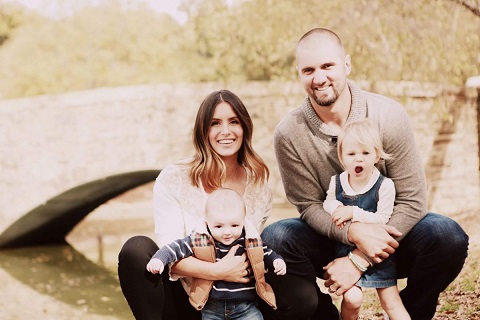 They have a lovely little family going as they share an adorable baby girl named Amelia. Anderson and Mallory did some kind baby profile back in 2014 shortly after the birth of Amelia for a local news channel.

They own a Labrador dog named Bandon.

A native of Portland, Oregon, Derek Anderson was born on 15th of June 1983, to Glenn Anderson. His star sign is Gemini. By nationality, Anderson is an American, and he belongs to white ethnicity.

Anderson enrolled at Scappoose high school where he initially started off his football career as well as playing basketball.

In his senior year, Anderson was named state player of the year in both basketball and football. In 2000, he participated in U.S. Army All-American Bowl game.

In the following season, he was thrust into the starting roster as a quarterback as well as handed the reins of a rapidly improving program.

In his senior year, Anderson was named the fourth player in Pax-10 history to throw for over 4,000 yards in a single season, recording the Oregon State Beavers football at 4,058 yards in the 2003 season.

In the 2005 National Football League Draft, Anderson was selected 213th in the 6th round by the Baltimore Ravens. However, on 20th September of the same year, he was waived.

On 21st September 2005, Cleveland Browns claimed off waivers of Anderson.

In the 2006 season, Anderson was a Frye’s substitute for the Browns. On 22nd October, he made his NFL debut against the Denver Broncos at Cleveland Browns Stadium. Further, he ended the season appearing in five games and recording eight interceptions, five touchdowns, and 193 passing yards.

Despite the fact that Anderson outplayed obligatory starter Frye and rookie Brady Quinn in minicamp, he was not as fruitful in the pre-season games, and Frye was announced as the Browns’ starter for the 2007 season.

On 4th February 2007, Tom Brady of the New England Patriots pronounced he would not be playing the Pro Bowl due to his injury, which paved the way for Anderson to make his debut in the Pro Bowl.

On 29th February 2008, Anderson signed a three-year contract with Browns. With fans fragmented between the proven Anderson and the locally-homegrown Quinn, many were wondering if the Browns were in a similar position the San Diego Chargers were in a few years back with Philip Rivers and Drew Brees.

In 2009 season, Anderson played only eight games representing the Browns.

On 17th March 2010, Anderson arrived at Arizona Cardinals, signing a two-year contract worth $7.25 million. Following the retirement of Kurt Warner as well as Matt Leinart released, Anderson became the starting quarterback for the Arizona Cardinals.

On 31st July 2011, Anderson signed with the Carolina Panthers. Since then, he has been the substitute player to quarterback Cam Newton and has played a few times for Carolina either for an injured starter or to end the game.

On 7th September 2014, Anderson made his debut.

On 7th February 2016, he was a team member of the Panthers who played in Super Bowl 50.

In 2017, Anderson was released as a free agent by the Carolina Panthers.

On October 7, 2018, Anderson signed with Buffalo Bills, reuniting with Sean McDermott and Brandon Beane. On December 31, 2018, Anderson re-signed a one-year contract with the Bills.