Dennis Scott is a well-known American retired professional basketball player. Scott played in the NBA for more than a decade. He played as a Small Forward with the team. Dennis spent his seven-season with Orlando Magic and moved to numerous franchises in the next three years. Scott made it to the NBA All-Rookie First Team in 1991.

Dennis Scott was born Dennis Eugena Scott on September 5, 1968, in Hagerstown, Maryland. He rose to fame only after his successful career so, much information about his early life and his parents is under the radar. After completing from Flint Hill High School, Scott enrolled at Georgia Tech University. Scott stands six feet and eight inches tall and weighs 104 kg.

Dennis Scott has an estimated net worth of more than $10 Million. He has earned much of his net worth through his successful career as a basketball player and a commentator for NBA on TNT. Scott signed $12 Million contracts for five years. He earned $1.5 Million in his rookie year. In the following year, His salary increased by $400,000 each year. 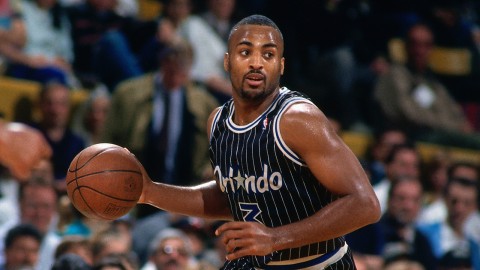 CAPTION: Dennis played in the NBA for a decade SOURCE: Pinterest

Scott earned $3 Million as his salary in the 1996 season. In the 1997/98 season, The NBA Player moved to Dallas Mavericks for $2.9 million in wages. The following season, Scott moved to New York Knick for a $1 Million Salary. In the next two years, Dennis earned over $3 Million.

Dennis Scott tied his wedding knot with his longtime girlfriend, Rachel Scott. The duo had a private and lavish wedding ceremony where they invited only a few members from both the families and some close friends to their wedding ceremony. Shortly after the wedding, Dennis and Rachel welcomed two children, Dennis Scott III and Ryan Scott.

Dennis also the biological father of a daughter, Crystal, with his former girlfriend, Geri Finley. In 1998, Scott appeared in court to finalize the child support money. Dennis is living a happy married life along with his wife and their children.

Dennis played basketball for his High School team. He got several scholarships but chose to play for Georgia Tech. During his junior season, 1989-90, he led the Yellow Jackets to win the ACC Tournament Championship and was named ACC Player of the Year. Scott forged his senior year and enrolled for NBA draft 1990.

Scott played eighty-two games and averaged 2.9 rebounds, 1.5 assists, 0.8 steals, and 15.7 points per game. In 1996, He set an NBA single-season three-point field goal tally with 267. He also set the NBA record for most three-pointers made in a single game. Unlike other players, Dennis could not make much impact in the games. Dennis decided to retire in 2000. However, The player agreed to return to Shaquille O'Neal and Brian Shaw, but the franchise decided to go with other players.

After retiring from basketball, Scott has been working as a commentator for NBA on TNT. He was part of the Atlanta Vision of the American Basketball Association as a general manager.