Delonte Maurice West a.k.a. Delonte West is an American retired basketball player who played in the National Basketball Association (NBA) for the Boston Celtics, Seattle SuperSonics, Cleveland Cavaliers, and Dallas Mavericks. Besides, he also played in the Chinese Basketball Association for the Fujian Xunxing and Shanghai Sharks and the Texas Legends of the NBA G League. He finished his collegiate career at r Saint Joseph's University.

Washington, D.C. native, Delonte West was born on 26th July 1983, under the star sign Leo. The thirty-seven years old is an American by nationality and is of multiracial, with African American, Piscataway Native American, and European American heritage.

How Much is Delonte West Net Worth In 2020? NBA Career earning & Lifestyle

As of 2020, West's net worth is estimated at $1,000 only. Though he summoned around $14 million in salary alone during his NBA career, years later was seen struggling deeply with drugs and other problems.

During the NBA lockout, he was living out of the Mavericks locker room and was forced to sell off all of his jewelry and several cars. At that point, he also had a temporary job at Home Depot to make ends meet. He reportedly lost a fortune in his divorce and in legal fees defending various issues. Further, other issues for financial crisis considered he purchased homes for each of his parents and has provided other financial support for relatives.

In August 2019, the former basketball player was photographed looking somewhat poor and perhaps homeless. A few months earlier he was photographed walking around a fast-food restaurant parking lot without shoes, looking disheveled.

Where Is Delonte West Now?

After pictures flooded West as panhandling at an intersection in Dallas, Texas, Mavericks owner Mark Cuban picked up West from a gas station on 28th September 2020. Cuban offered to pay for West’s drug treatment as well as a hotel room to stay in.

Early in his NBA career, West was in a relationship with Caryn Taylor. The couple was a live-in relationship. However, things turned messy in 2007 when West tried to break up with her. Reportedly, Taylor lashed out at West, trying to choke him and also shoving his sister. According to the police reports, she tried to slash her wrists with shards of glass. At that time, Taylor was charged with domestic assault and but the extent of the attack was only made public when she skipped her court hearing.

Then West started dating Kimberly Ashley Awad. The couple exchanged the vows in 2009 off-season, in Nevada in July Not long before that, he was diagnosed with bipolar disorder in 2008. Though he intially accepted the diagnosis, he later opposed it, saying that his difficulties resulted from a combination of temporary depression and the stresses of a basketball player lifestyle.

West and Awad reportedly separated a few weeks after their marriage and ended up finalizing their divorce in 2010. His marriage to his first wife, Kimberly Awad, ended very early into his career when his mental illness struggles were brought to the fore.

Then while playing for Dallas Mavericks, West met his future wife, Caressa Suzette Madden at a mutual friend’s home. They not only hit it off, she immediately moved into West’s mansion. 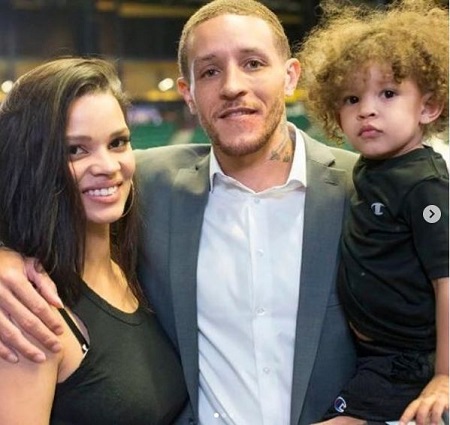 At the same time, West's financial condition has already dropped down and continued to worsen such that when winter came even he couldn’t afford additional heating for the house. Back then Madden was pregnant with their first child. To help her get through the cold, West warmed water on the stove to take a bath for the pregnant Caressa and filled the house with multiple portable space heaters.

West popped a question to his pregnant girlfriend with a piece of string from a jump rope he found. “It’s all I can afford, baby,” he punctuated the proposal. “I’m broke, heat ain’t working, brain ain’t working right, but I love you.”

West and Madden tied the knot in 2013, in a intimate wedding ceremony. Shortly after their marriage, the couple welcomed their son, Cash West, shortly after their wedding. According to some reports, she and West have a second child, too.

Delonte West is the son of Delphina Addison and Dmitri West. Grew up in poverty, he already battled with mental health as a teenager. He sank into a depression, abused drugs, engaged in self-harm, and spent time in children’s hospitals.

West enrolled at Eleanor Roosevelt High School in Greenbelt, Maryland. Upon graduation, he joined Saint Joseph's University where he averaged 18.9 points and 6.7 assists per game, shooting 41% from three-point range as a junior.

At the 2004 NBA Draft, West was picked by the Boston Celtics as the 24th pick. After three seasons with the Celtics, he was traded o the Seattle SuperSonics, along with Jeff Green and Wally Szczerbiak in exchange for Ray Allen and Glen Davis. On 21st February 2008, he was traded from Seattle to Cleveland Cavaliers where he would play the next three seasons, On September 12, 2008, West signed a three-year $12.7 million contract with the Cavaliers. In a match against Miami Heat, he set a career-high with 8 steals on 2nd March 2009. After LeBron James left the Cavaliers to sign with the Miami Heat, the Cavaliers traded West to Minnesota Timberwolves. Timberwolves waived him shortly after.

After that, he played for the Texas Legends of the NBA D-League. In October 2013, he signed to Fujian Xunxing of China. In July 2017, he was signed by Los Angeles Clippers for the 2014 NBA Summer League. In September, he joined the Shanghai Sharks, returning to China for a second stint. Next, he had a brief stint with Guaros de Lara of the Venezuelan Liga Profesional de Baloncesto. On 12th March 2015, he was acquired by the Texas Legends. The following month, he was waived by the Legends after suffering a season-ending injury.