David Daniel Fales is a professional American football player who is currently a free agent. Previously, he played for Chicago Bears, Baltimore Ravens, Miami Dolphins, and Detroit Lions in the NFL.

The twenty-eight years old football quarterback has an estimated net worth of $1 million. Regarding his relationship status, he is married.

How Much Is David Fales Net Worth? Know His Salary & Contract

David Fales has an estimated net worth over $1 million as of 2019. Not to mention, the significant source of his income is his football career. Further, the hunk has summoned $2,607,030 through five seasons in NFL.

David Fales is a married man. He tied the knot with his long-time girlfriend, Kylie Deeann in March 2016. Further, on 18th September 2019, they welcomed their first child, a baby girl named, BoDee Haiz Fales. 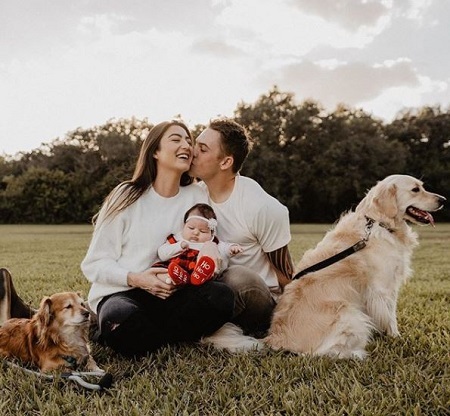 Reviewing his body profile, he stands a height of 6 feet 1 inch and weighs only 96 kg.

David Fales was born on October 4, 1990, in Salinas, California, the United States. He holds American nationality and belongs to white ethnicity. His birth sign is Libra. David is the son of Tayna Fales (Mother) and Mr. Fales. He has a brother named Austin Fales who also played football along with David.

David Fales first enrolled to Palma High School where he got selected as all-league quarterback for two times. On that point, he played several matches and became Tri-County League Offensive MVP. Including his incredible skills, he attracted the attention of numerous colleges such as Boise State, Colorado State, Kansas State, and so on. However, he joined University of Nevada, Reno, as he had already signed with Nevada before his graduation from Palma.

During his year at Nevada in 2009, David started his football career along with Colin Kaepernick. Nevertheless, he left Nevada because he was not satisfied with their performance. Afterward, in 2010, he returned to his home Monterey County and played for the Monterey Peninsula College. Correspondingly, he led his team 2011 Coast Conference co-champion and qualified for the Sierra Central Credit Union Bowl.

David Fales made his professional football career debut with Chicago Bears where he was selected in the 6th round of the 2014 NFL Draft. There he played almost 2 years for the team and on September 6, 2016, he signed to the Baltimore Ravens practice squad. However, he left Baltimore after 2 months and again resigned with Chicago Bears.