David Dahl is a native American professional Major League Baseball player who plays for the Colorado Rockies as an outfielder. Dahl was directly selected out of high school by Colorado in the 2012 MLB Draft in the first round. David also played for the United States-18 baseball team representing in the 2011 Pan American Games.

Initially, he played as a shortstop during high school days. Besides, he is also a member of the United States team winning the gold medal. Dahl made his debut in the major leagues on 25th July 2016 in a game against Baltimore Orioles.

The Rockies outfielder David Martin Dahl was born in Birmingham, Alabama, on the 1st of April 1994 with American nationality and white ethnicity. Well besides his popularity in baseball, he is also a happily married man and is currently living with his wife Jacquelyn Davis on November 12th, 2018.

With such impressive annual income, David's net worth is estimated to be beyond $3 million in the current date. Well, so far he has earned a total sum of $7,436,793 in estimated five MLB seasons.

David signed his first contract with the Colorado team in 2012 which was worth $2.6 million. Besides, the contract included a guaranteed sum of $2.6 million. Later, Rockies extended his contract for a year worth $537,000 in 2017. 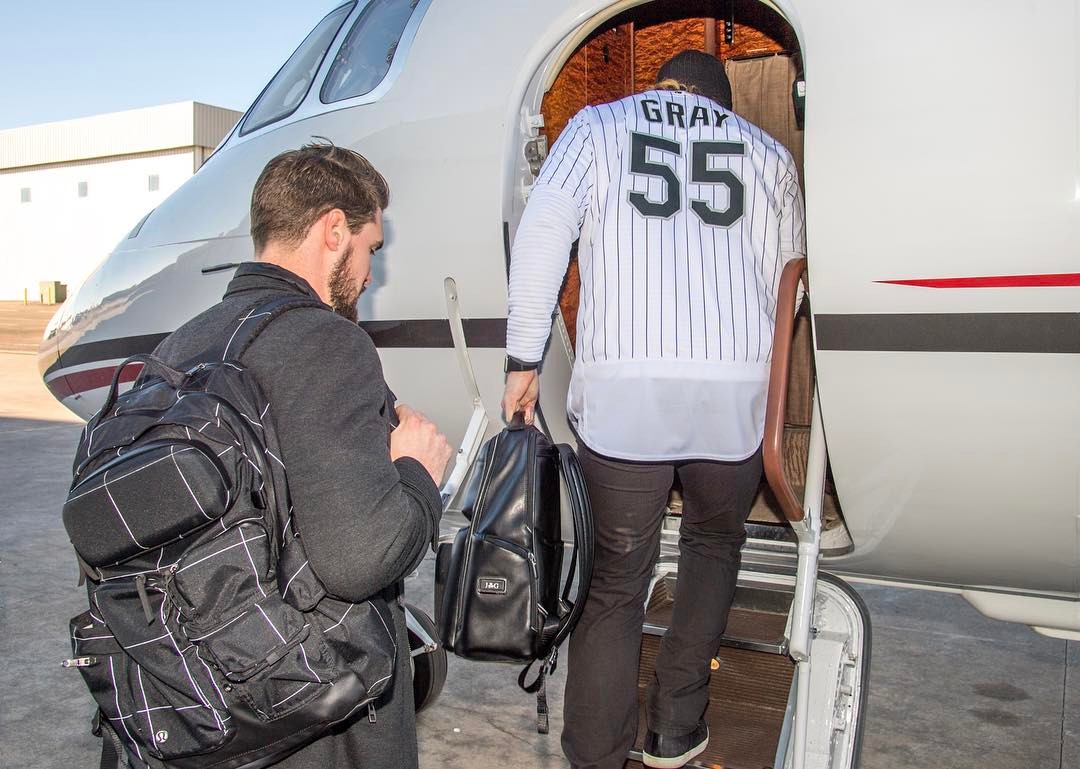 The Rockies famous outfielder David Dahl recently celebrated his first marriage anniversary in November. He walked down the aisle with his fiancee Jacquelyn Davis on the 12th of November 2018. The wedding ceremony was held on Friday at La Jolla, California and was attended by his family and friends. 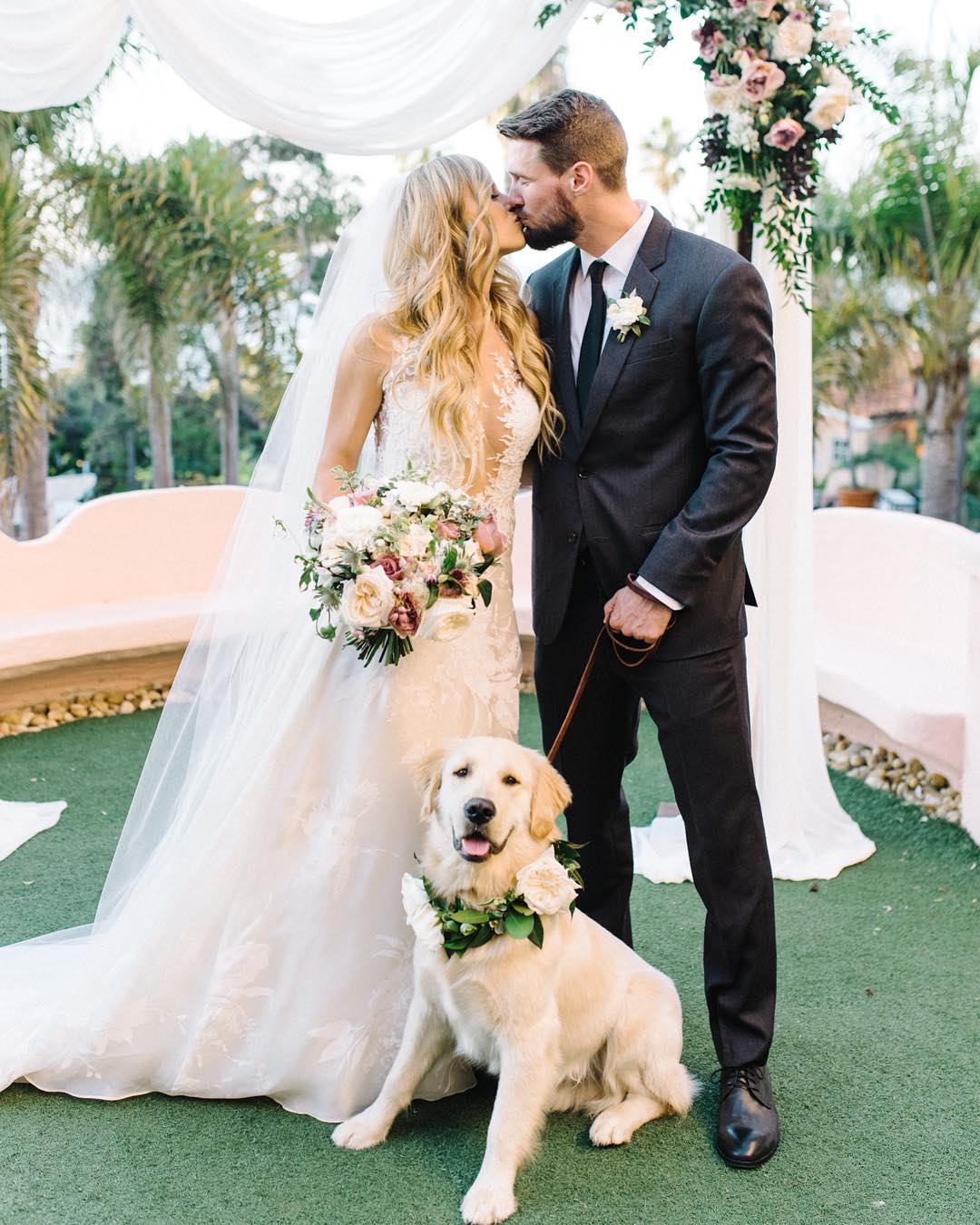 Well, his teammate Charlie also got married the next day with his sweetheart Ashley Cook in Highlands, California. Moreover, in the same month, another teammate Trevor Story married his highschool sweetheart Mallie Crow in Grapevine, Texas.

David and his girlfriend turned wife might have started dating each other in late 2015 as they posted their first photo on their social media on November 16, 2015. After that, they were spotted several times together in public events and also in social media.

The couple doesn't hesitate to share their love life in the media as frequent posts are being shared by them regarding their relationship. 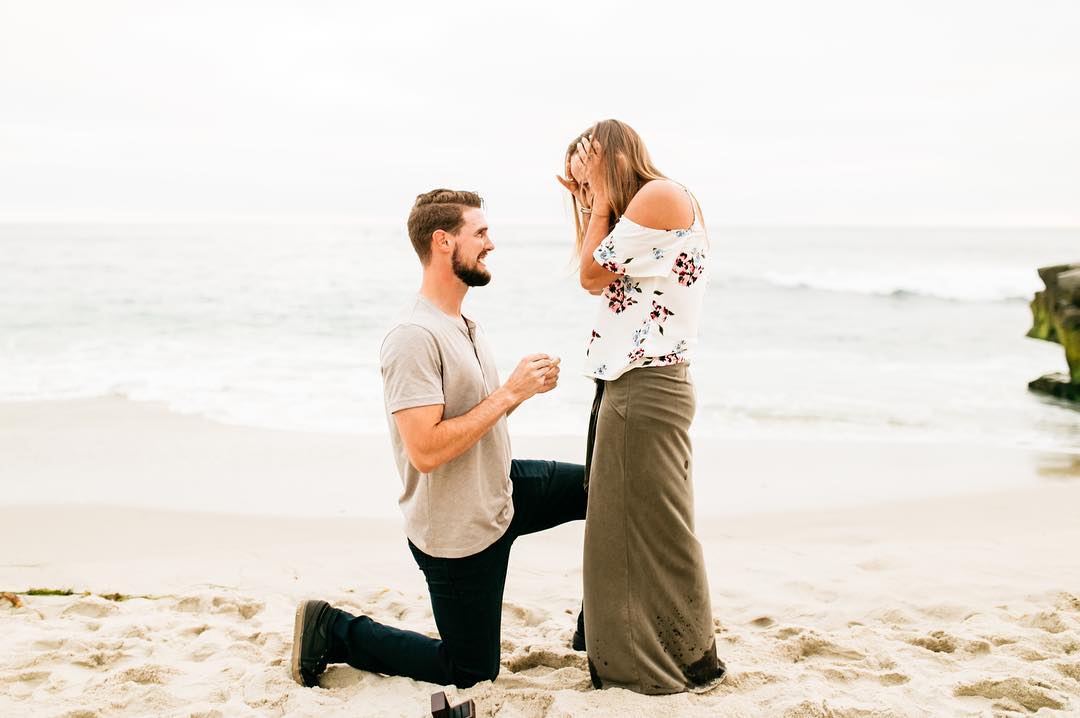 David officially proposed his girlfriend with a diamond ring on July 11, 2017, by bending down on his knees and he remembers the moment saying" I locked down her for my life on 7-11-17."

Who is Jacquelyn Davis?

Jacquelyn Davis, the beautiful and stunning wife of the famous Rockies outfielder is herself in sports business. Jacquelyn was born on December 20, 1991, in the United States. Davis is the founder of the 1UP Sports Marketing in Scottsdale, Arizona. She is the sports marketing agent for athletes and brands. 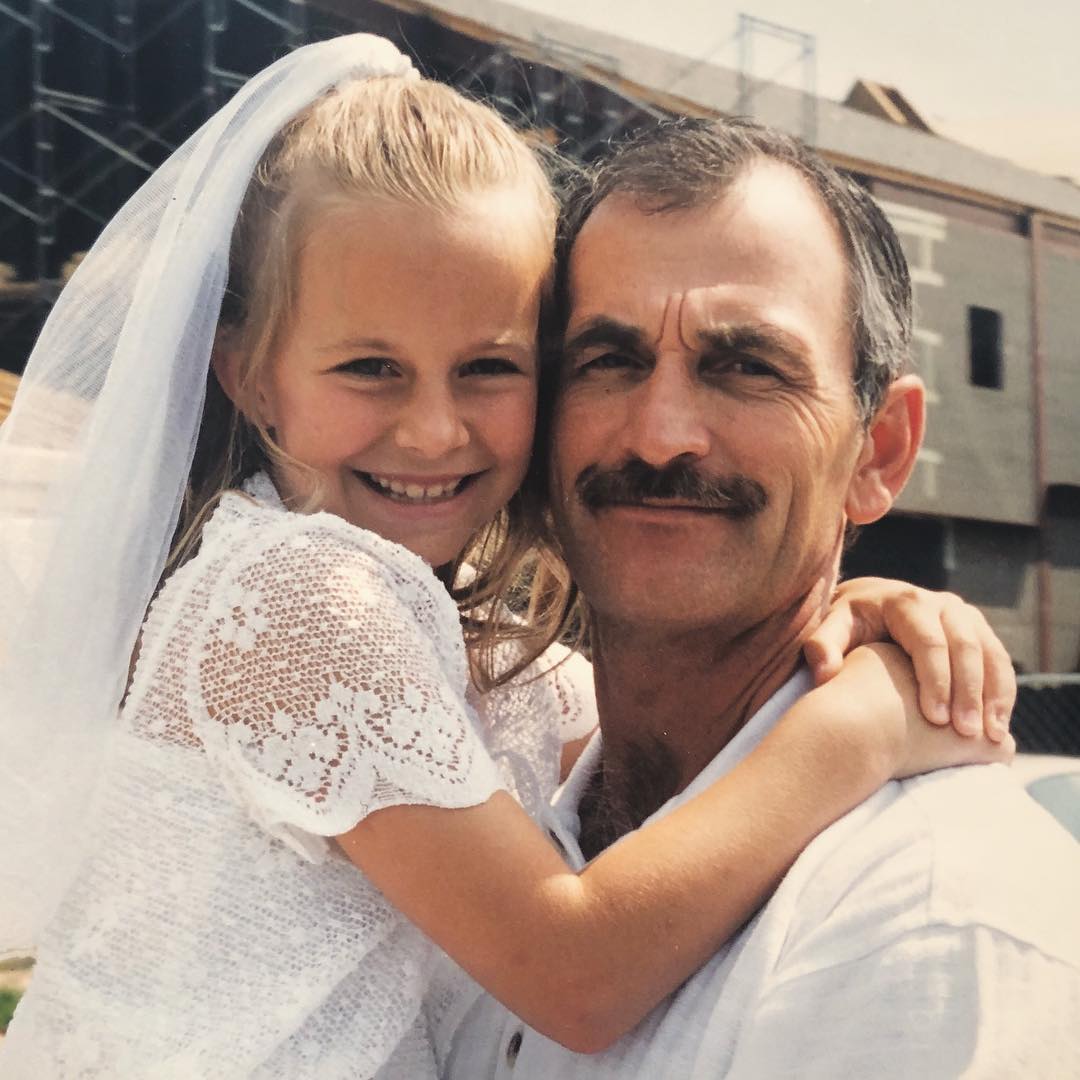 Davis with her father during her childhood days SOURCE: [email protected]

Before this, she was the Director of Marketing of the Select Sports Group where she worked from 2015-2018. Moreover, she also worked for the San Diego Padres, Houston Astros, FOX Sports San Diego, and many other teams. 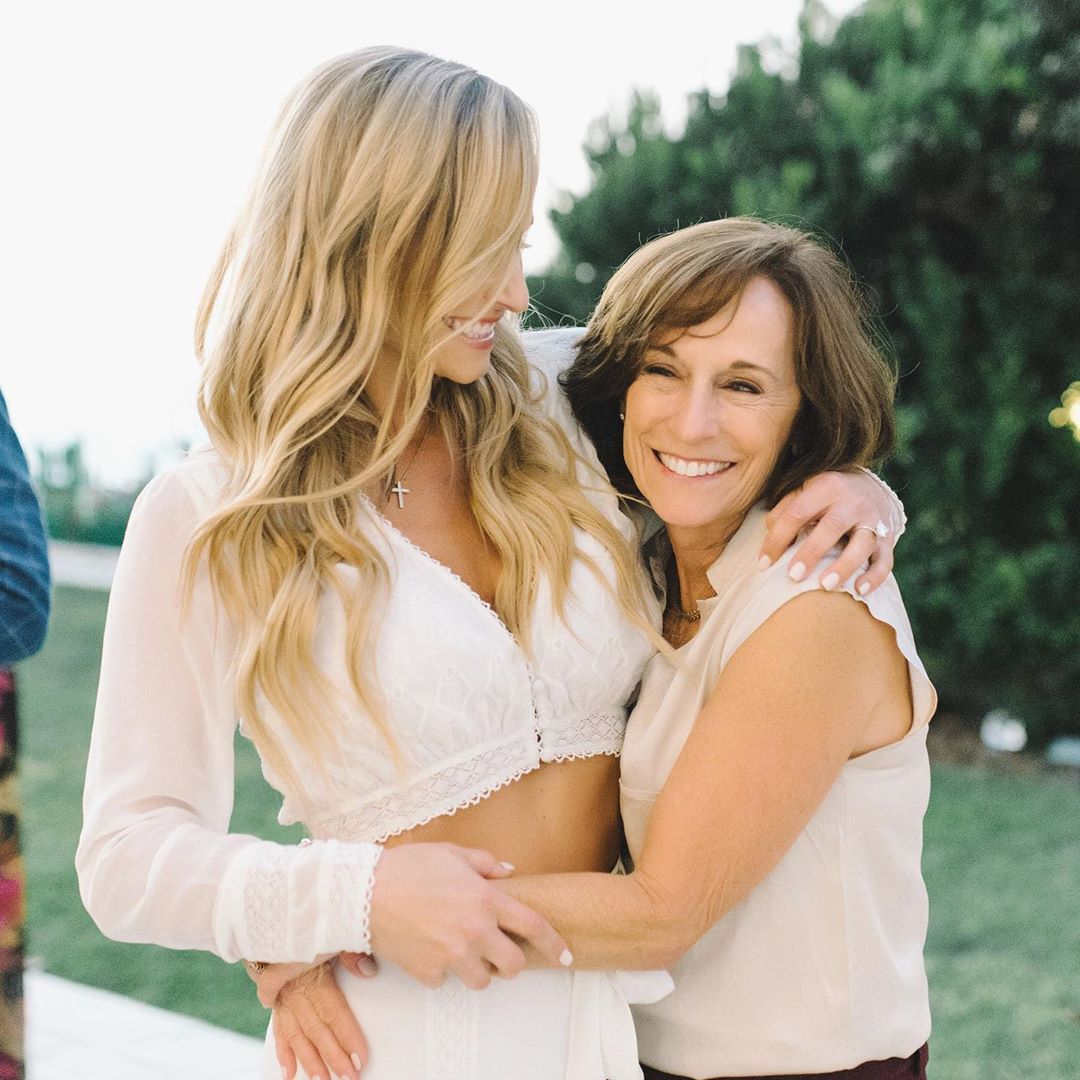 Talking about her educational qualifications, she completed her graduation from the University of California, in San Diego. Moreover, she is the winner of the 2010 Scholar-Athlete Milk Mustache of the Year Award. She is also an active social media user and it appears that she lives an awesome life as her pictures suggest so.

Alike some of the professional athletes, David is also very much passionate about animals as he has a pet dog. Besides, his wife also shares the same emotion towards dogs and she has a dog named George. Well, most of their social media posts are seen with their dogs. 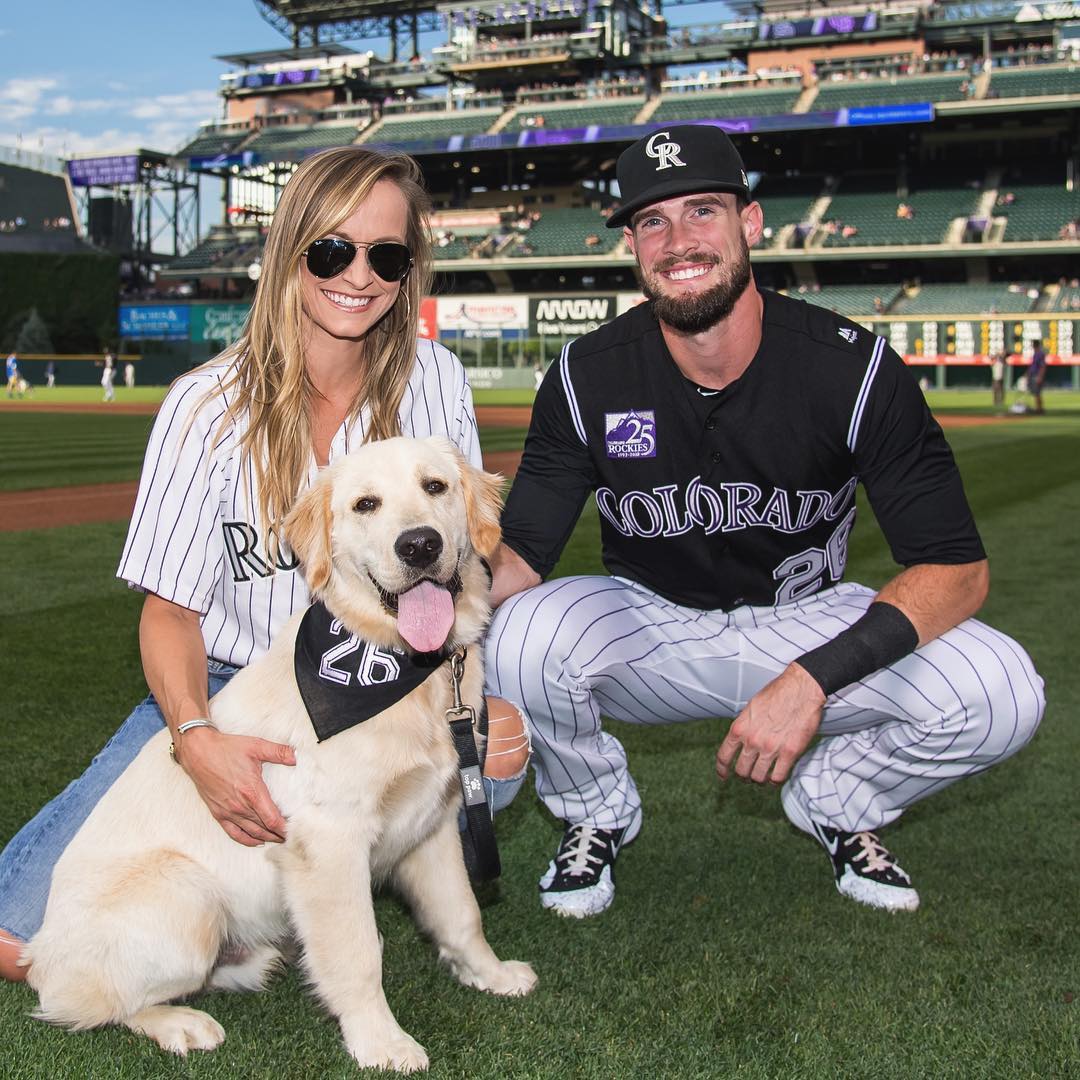 David and his wife with their dog SOURCE: [email protected]

In addition to their affection towards animals, they are also involved in social services. David and his wife participate in charity shows and helps raise funds for various causes. As per the reports, Jacqueline recently visited Boston for a charity event.

The 6 feet 1-inch tall baseball outfielder completed his high school education from the Oak Mountain High School which is located in Birmingham, Alabama. Dahl played baseball for his high school team in the position of shortstop.

Later, he committed to play for the Auburn University's team Auburn Tigers but didn't sign with them.

David's MLB journey started after he was drafted by the Rockies in the 2012 Major League Baseball draft. In the initial phase, he played in the minor leagues until he made his debut on 25th July 2016. During his minor league career, Baseball American ranked him the 2nd best prospect in 2013.

Moreover, he was also named the Pioneer League's most valuable player. He played for Asheville Tourists, Modesto Nuts, New Britain Rock Cats, and many other teams. Currently, the Rockies team is managed by Bud Black.