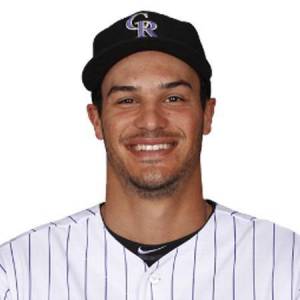 The very much professional Nolan Arenado is one of the most decorated baseball player. He is an American professional baseball third baseman. He plays for the Colorado Rockies of Major League baseball (MLB). On April 28, 2013, at the age of 22, he made his major league debut. In 2015, he bagged the first All-Star selection and Silver Slugger Award while playing for the National League in home runs and runs batted in. Nolan Arenado was born on April 16, 1991. His birth name is Nolan James Arenado. He was born on April 16, 1991. His place of birth was Newport Beach, California, United States. He is American. His birth sign is Aries.

Nolan Arenado went to EI Toro High School in Lake Forest, California where he played shortstop on the school’s baseball team. In his junior year, due to his marvelous performance, EI Toro won the California Interscholastic Federation Southern Selection Championship. As a senior, he had a .517 batting average, .615 OBP, five HR, 14 doubles and a triple. Later on, he accepted a baseball scholarship from Arizona State University.

From 2009 to 2012, he played in the minor league of baseball. On April 28, 2013, he played his first MLB game. He debuted against the Arizona Diamondbacks at the Chase Field. In the second game against the Dodgers, he recorded his first three major league hits, which includes his first home run in a 12-2 win. On June 28, 2015, he bagged his second NL Player of the Week Award. On January 15, 2016, he agreed to a one-year, $5million contract with his current team.

Nolan Arenado is the son of Millie Arenado and Fernando Arenado. His father is Cuban and his mother is Puerto Rican. He is not the single child of his parents. His only one younger brother plays baseball in San Francisco Giants organization. His favorite baseball player is Matt Holiday.

He is one of the popular players of baseball. He has never been caught into rumors of girlfriend and affairs. As of now, he has not been dating anyone so far. His fans and followers have countless queries. It seems he is single and enjoying the single life. It seems like he is not married. He has never talked much about his private life in front of media, so it is extremely tough to find out his secrets. Despite having many female fan following, it seems like he has not been able to find his miss perfect yet. However, he is popular and successful too, so his fans sooner will get news about his love life. There is a big question behind his sexual orientation. However, he does not look like a gay at all.

As of 2016, his salary is 5 million USD. He is a tall man and has an impressive personality. He has a height of 6 feet and 2 inches. He is popular on Twitter and Instagram.