David Nelson Cutcliffe is an American college football coach who currently served as the head football coach of the Duke University Blue Devils, a position he has held since 2008. Under his coaching, in 2012 the Duke Blue Devils ended an 18-year bowl drought and also brought the Victory Bell back, beating the arch-rival University of North Carolina. The following season, they won the ACC Coastal Division championship.

Birmingham, Alabama native, David Cutcliffe was born on 16th September 1954, under the star sign Virgo. The sixty-six years holds an American nationality and is of white ethnic background.

How Much Is David Cutcliffe's Net Worth In 2021?

Duke football coach David Cutcliffe ranks tenth in the ACC in pay as of 2019. His deal with Duke was extended through the 2022 season which is worth $2,669,345 per annum. Since Duke is a private school, other financial information such as bonuses and buyouts are not disclosed to the public.

David Cutcliffe has been into coaching for forty-five years now. Sure, he has built his net quite impressive which is believed to be $5 million as of 2021. He owns a beautiful mansion in Durham, North Carolina (NC), US.

Is David Cutcliffe Is Married?

David Cutcliffe is a married man. He tied the knot with Karen Cutcliffe. Together the couple is blessed with four children: Marcus, Chris, Katie, and Emily. 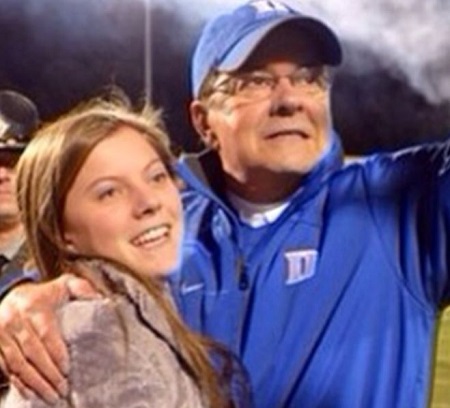 Cutcliffe attended Banks High School in Birmingham where he played football. He attended the University of Alabama, where he worked as an assistant director of the athletic dormitory.

David Cutcliffe began his coaching career in 1976 joining Banks High School where he worked as an assistant and later head coach.

In 1982, he was hired as a part-time coach at the University of Tennessee. The following year, he was promoted to full-time status as the tight ends and assistant offensive line coach. By 1990, he was a quarterbacks coach. In 1993, he became the offensive coordinator.

On December 2, 1998, Cutcliffe was hired as the head football coach at Ole Miss. He had success at Ole Miss, where he recruited Eli Manning, son of Ole Miss player Archie Manning, to play quarterback. In 2003, he won the Cotton Bowl Classic, the Rebels' most prestigious bowl game since the Johnny Vaught era. Cutcliffe was fired by Ole Miss Athletic Director Pete Boone in December 2004 after his only losing season at Ole Miss.

Then Cutcliffe was hired by head coach Charlie Weis as the assistant head coach and quarterbacks coach at Notre Dame, but health problems forced him to resign before his first season there.

On 14th December 2007, Cutcliffe was hired as the head football coach at Duke University. Coming to 2021, Cutcliffe is already third on Duke's all-time wins list, behind only Hall of Famers Wallace Wade and Bill Murray.