Dave Ryan is a famous sportscaster currently working for CBS. Known for his appearance in calling Major League Lacrosse for the CBS Sports Network. He previously worked for ESPN. Further, he began his broadcasting at UUTV, now known as CitrusTV, the student-run television studio at Syracuse University.

The resident of Baldwinsville, Dave Ryan, reportedly earns in the range of $60,000 - $176,166, as his yearly salary from the network, and as of 2018, he reportedly has an estimated net worth of over six-digit figure.

Dave Ryan was born on June 20, 1967, in the United States.H e holds an American nationality and belongs to the white ethnic group. In addition, the details about his parents and siblings are not available yet.

Dave completed his education from Syracuse University, but the details about his field of study are still not in the media.

Dave Ryan Net worth and Salary

The American sportscaster/anchor Dave Ryan has an estimated net worth over Six digit figure. Further, the exact details about his salary are not available yet in the media.

Further, CBS reporter receives an added sum of money from his radio and TV guest appearances as a sports pundit too.

He currently, lives in Baldwinsville, along with his family, and has a beautiful home there.

Before joining CBS College, Dave spent 13 years at ESPN, where he appeared on more than 1200 shows covering more than 20 sports for ESPN, ESPN 2, ESPN Classic, ESPNU, and ESPN Radio.

As a reporter, an anchor and an announcer, Dave have covered the NHL, MLB, College Football, College Basketball, the Little League World Series and the College World Series. 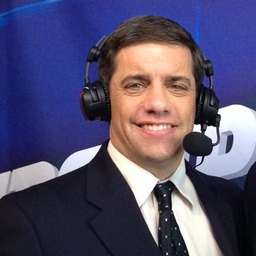 In 2003, he received the Emmy Award for covering the Little League World Series in ESPN.

Dave is happily married to his wife and has three daughters and a son with her. Currently, Dave resides in  Baldwinsville, along with his family.

In addition to his broadcasting duties, Dave is an adjunct faculty member at the Newhouse School of Public Communications at Syracuse University. He helped create and run a mini-course for professional athletes who want to become broadcasters in sports broadcasting.