Vernon Hills, Illinois native DaVaris Daniels is a professional Canadian football wide receiver who currently plays for the Toronto Argonauts of the Canadian Football League (CFL). His professional career started with the Minnesota Vikings after signing a contract with them as a free agent. Later, he played for various teams, and since 2020, he has been with Toronto Argonauts.

DaVaris Daniels is a well-known football wide receiver who wears jersey number 80 and plays for the Toronto Argonauts. The 29-years aged wide receiver played college football at Notre Dame. Apart from being noted for his professional works, Daniels has also gone through some ups and downs. On January 9, 2014, he was suspended for the spring semester for an academic problem and was not allowed to practice with the group.

DaVaris Daniels was born on December 18, 1992, in Vernon Hills, Illinois, making his age 29 years now. Daniels is pretty close to his parents, Phillip Daniels and Leslie Daniels. Furthermore, Daniels is also noted as the son of Phillip Daniels.

For your information, Phillip is a former American football defensive end and coach. He worked as defensive line coach for the Philadelphia Eagles of the National Football League (NFL). During his active playing career, Daniels played for the Seattle Seahawks, Chicago Bears, and Washington Redskins.

After retiring from professional football, Daniels began working as a coach and served on some teams. Talking about DaVaris' family, he also has three siblings named DaKendrick, Damara, and DaKiya. All of them share a strong bond with each other.

Take A Look At His College Career and Some Issues

Daniels attended Vernon Hills High School. As a senior, Daniels led his team to the Illinois Class 5A quarterfinals in the 2010 state playoffs. He had an amazing career and had also earned various honors. Similarly, he was a member of Vernon Hills basketball teams. On September 29, 2010, it was announced that he was committed to the University of Notre Dame. 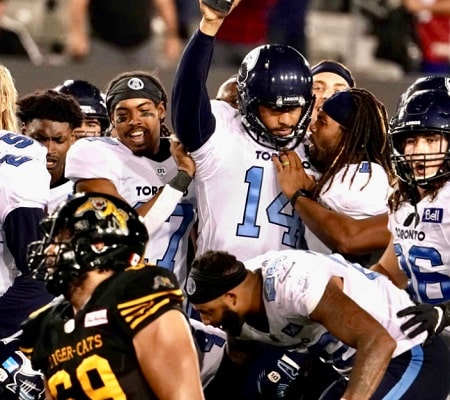 DaVaris Daniels his win with his team SOURCE: Twitter @CFLNewsHub

As a sophomore in 2012, he played in 11 games catching 31 passes for 490 yards. He also participated in the 2013 BCS National Championship Game and gave his best. As mentioned earlier, Daniels had faced some issues in his academic career. He was suspended for the spring semester for an academic issue on January 9, 2014.

So, he was not permitted to practice with the team. Likewise, he was considered academically ineligible by the university. Not only that, but he was on academic probation after failing to maintain a 2.0 GPA in the fall semester. And Daniels was re-instated by the university on May 28, 2014. For some time, he faced some problems, and it was announced his intention to withhold his remaining eligibility and join the 2015 NFL Draft.

Daniels came into the spotlight after signing a free-agent contract with the Minnesota Vikings. During that time, he gained a $10,000 signing bonus. And on September 1, 2015, the New England Patriots grabbed him off waivers. Meanwhile, he was waived by the Patriots only three days later.

Furthermore, the Calgary Stampeders signed him in time for their 2016 season. He played in 11 games for the Stampeders in his rookie season, catching 51 passes for 885 yards with nine touchdowns. Likewise, he had an amazing performance and also earned the award for the CFL's Most Outstanding Rookie Award. When he played for the Stampeders team, he also faced some injuries. For your information, he suffered a broken collarbone. 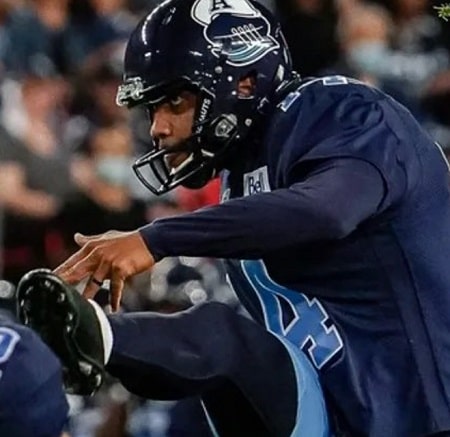 DaVaris Daniels in one of his matches
SOURCE: Twitter @RotoWireCFL

Apart from that, the Edmonton Eskimos signed him on February 12, 2019, as a free agent. Similarly, he signed another contract with the Toronto Argonauts on February 11, 2020. But he did not play in 2020 due to the revocation of the 2020 CFL season. And on January 31, 2021, Daniels re-structured his agreement with the Argonauts.

Daniels Salary and Net Worth Revealed

The 29-years-old player has amassed a massive amount of money from his professional football career. In his current team, Daniels has a base salary of $99,000. Also, when he signed with the team, he received a $40,000 signing bonus.

Likewise, Daniels has participated in various games and has also received some cash prizes. Considering all the facts, we can speculate that Daniels' net worth in 2022 is somewhere around $1 million to $5 million. Currently, he is associated with the team of the Toronto Argonauts. So, it is clear that Daniels is making a good sum of money from his profession, and he lives a lavish life with his high income. Apart from earning from his professional career, Daniels might earn something from sponsorship and endorsement deals. No doubt his income will rise in the future as he is still active in his field.

Relationship Status: Does Daniels Have A Girlfriend?

According to his Twitter bio, Daniels is a father. From this, it can be said that he is a married man and has a wife. However, he is very secretive about his personal life and does not share much with the media. So, due to his low-key nature, the details regarding Daniels' wife or girlfriend remain under review.

Furthermore, Daniels is not active on Instagram, but he is most active on Twitter. So, from his account, he mainly shares details regarding his profession. On that platform, Daniels has not made a single post about his love life.

As said earlier, Daniels is active on Twitter, where he is registered as @sincerelytoot. Since March 2011, he has been using this platform, and at the time of this writing, Daniels has gained over 10.1k followers.