Darwin Machis is a well-known Venezuelan professional football player. He is currently playing at the Spanish football league, La Liga. Darwin turned professional in 2011 with Mineros de Guayana. Machis plays as a striker for his club and country.

Darwin Machis was born on February 7, 1993, in Tucupuita, Venezuela. He rose to fame through his successful career and has not shared much about his early life and parents. Talking about his physical appearance, Machis stands five feet and seven inches tall and weighs 75 kg.

Darwin Machis has an estimated net worth of more than $1 Million. A football player makes a handsome amount from multiple sources of income, including sponsorship and advertising deals. Machis receives an annual salary of £624,000 in the ongoing season of 2022. He has a weekly wage of £12,000. The player will receive the same amount of salary until his contract expires. Darwin is a married man living a happy married life. The player is a proud father of a daughter born in June 2017. He is pretty private about his wife and daughter. 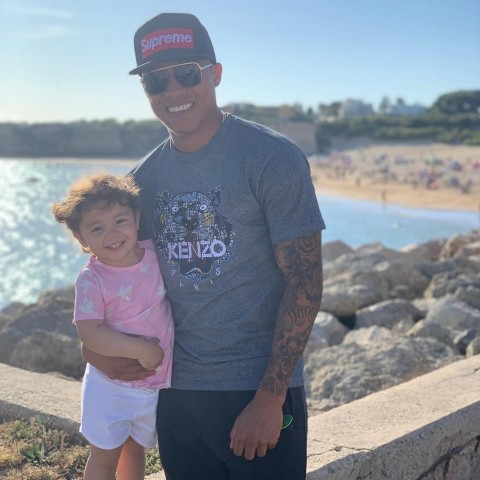 Darwin shares a photo with his daughter SOURCE: [email protected]

Machis has not shared a word about his wife. Darwin seems to be raising his daughter on his own.

Machis' trained with several youth academies in his early days and made his senior team debut in 2011 with Mineros de Guayana. He represented the club for a year, appeared in twenty-eight games, and scored eight goals. Darwin moved to Granada FC the following season and signed a five-year contract with the club.

Machis represented the Granada B team in his early days and was loaned to Vitoria Guimaraes for the 2013 season. The following season, He represented Hercules and Huesca in the 2015/16 season. The player had a decent season with Huesca, moved to Italy, and signed with Udinese. Darwin appeared in thirteen games in a season. He was loaned to Cadiz for a season.

Darwin moved back to Spain in early 2019 and signed with Granada FC. Since joining the team in 2019, He has appeared in eighty-three games and scored fourteen games. Machis has had a decent season with the club.

Darwin has represented Venezuela in numerous divisions. He made his international debut in 2013 with the U20 team. The player was called for the senior team in 2011 and made his debut. Machis became a regular player in 2017 when He appeared in six games for the nation. Darwin has appeared in thirty-three games and scored nine goals for the national team.