Thomas is a 6 feet 3 inches former quarterback who played college football at Oregon. Furthermore, Thomas once made headlines on the internet when he appeared in the 2011 BCS National Championship Game match against Auburn. Similarly, he has received some honors for his performance and is also the co-recipient of the Skeie’s Award as the team’s most outstanding player.

Born on May 23, 1990, Thomas is currently 32 years old. His full name is Darron Varnell Thomas. Besides, Thomas was raised by his parents Latina Thomas and Darren Waters. His loving family also includes a sister but her name has not been shared with the tabloids. No doubt, Thomas has received huge support from his dad and mom. Talking about his physical appearance, Thomas is a tall guy who peaks at the height of 6 feet 3 inches (1.91m). And he weighs around 98 kg.

He attended Aldine High School in Aldine, Texas. As a freshman at Aldine, he played as a running back. Later, he was preparing to switch to the position of quarterback. During his senior year, he verbally committed to Louisiana State University.

When the LSU recruiting class for quarterbacks became 3 members, he de-committed. And on December 14, 2007, Thomas committed to the University of Oregon and he chose this team after getting offers from various teams like Florida, LSU, Miami (FL), Minnesota, Missouri, Nebraska, and Oklahoma State.

Talking about his college career, Thomas finished his career at Oregon with a 24–3 record as a starter, leading the Ducks to two consecutive Pac-12 Championships, including arrivals in two BCS Bowl games. From the team of Oregon, Thomas participated in various teams and led them to win various titles. After redshirting the 2009 season, he became the starting quarterback for the Ducks in 2010 after the prior starter Jeremiah Masoli was hovered for the 2010 season and eventually dismissed from the squad. 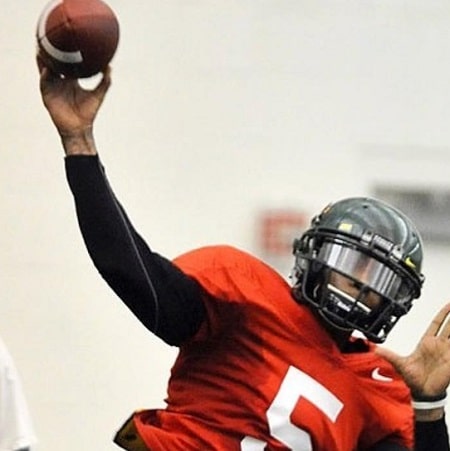 As mentioned earlier, Thomas also appeared in the 2011 BCS National Championship Game. During the 2011 season, he threw for 2,761 yards and a single-season school record of 33 touchdowns.

His fans were surprised when Thomas chose to forgo his senior year to join the 2012 NFL Draft. However, he was neither drafted nor signed as an undrafted free agent by any NFL team. For your information, Thomas was rated the 17th best quarterback in the 2012 Draft by NFLDraftScout.com.

Furthermore, Thomas' professional career started after signing a practice roster agreement with the Calgary Stampeders of the Canadian Football League on October 9, 2012. It was later announced that he would sign a contract with the Lincoln Haymakers but never played a game for the team. 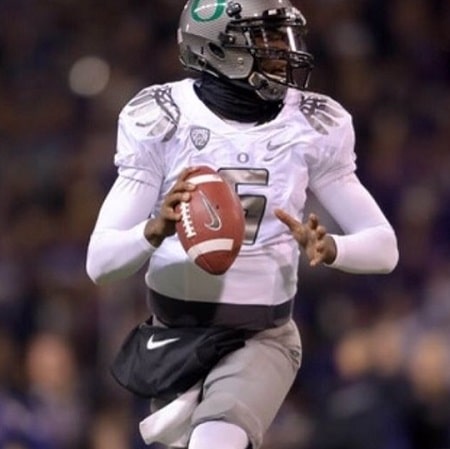 On October 10, 2013, he was assigned to the Portland Thunder of the Arena Football League. Furthermore, he began the first three matches of the season for the Thunder before being benched in support of Danny Southwick. Likewise, he became the primary backup for the Thunder after falling in his starting role. Entering his 2nd season with the Thunder in 2015, he was once again the backup quarterback to Kyle Rowley.

Similarly, Thomas was named head coach Chris Miller's franchise player in Major League Football on January 27, 2016. And on April 25, 2016, he was assigned to the Portland Steel. On May 10, 2016, he made his only start of the season in the match against Los Angeles Kiss.

On the other hand, he signed a contract with the Arizona Rattlers on October 28, 2016. In the 2017 season, he played in 5 games for the Rattlers finishing 54 of 93 passes for 576 yards, 13 touchdowns and 4 interceptions. On February 5, 2018, he was traded to the Cedar Rapids Titans in exchange for local Arizona product Jordan Gehrke but was released on February 21, 2018.

His career didn't stop there as he signed with the Massachusetts Pirates of the National Arena League on May 17, 2018. In the year 2019, Thomas was assigned to the Washington Valor but on April 19, 2019, he was positioned on reassignment.

The former American football quarterback made most of his gains from his career as an athlete. He was associated with various teams and had played in multiple games. So, his performances helped him gain not only fame but also a good sum of money. According to some online sources, Thomas is estimated to have a net worth of around $1 million to $5 million.

Not to mention, the average salary of an American football quarterback may be around $5,766,000, but the median income is $1,100,000. So, during his active career, Thomas might have earned in the same range. Currently, he is not active in this field and now might be engaged in other businesses from which he makes his living.

Personal Life: Does Thomas Have A Wife?

Coming into his personal life, Thomas is a single man and does not have a wife. Besides that, there is no data of him being involved in romantic affairs. So, the details regarding his girlfriend also remain unknown. Like many other athletes, Thomas also prefers to stay away from media sources as he does not wants to get involved in any unwanted controversies. Darron Thomas has a strong bond with his family SOURCE: Instagram @k_i_d_dt

Apart from that, Thomas is an active user of Instagram but he does not share much about his love life there. From that platform, Thomas mostly shares images of his family members. From this, it becomes clear that Thomas is pretty close to his family and shares a strong bond with them. Not to mention, his username is @k_i_d_dt.

So, we can follow him there to get more updates regarding his current lifestyle.