Darren Keet is a well-known South African soccer player. He is currently playing in the South African Premier League Football, and Cape Town City F.C. Darren plays as a goalkeeper for his club and country. Keet turned professional in 2007 with Vasco Da Gama.

Darren Keet was born on August 5, 1989, in Cape Town, South Africa. He rose to fame through his successful career and has not shared much about his early life and parents in public. Dareen stands six feet and weighs 80 kg.

Darren started training with the youth team of Ajax Cape Town. He moved to several youth academies before making his professional debut in 2007. Keet made his debut with Vasco Da Gama. Darren could not get into the regular team and then moved to Bidvest Wits. The player signed a three-year contract with the club. He appeared in fifty-four matches in his tenure with the club. 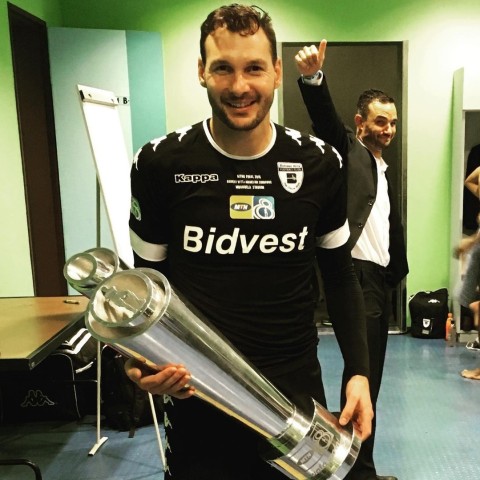 Darren moved to Belgian Professional League and joined KV Kortrijk. He signed a four-year contract with the club in June 2011. The player had a very successful career and extended his contract until 2016. At the end of his extension, Keet had appeared in 141 games for the club. Darren moved back to his former club, Bidvest, and signed a three-year contract until 2019. Keet played with the club until the end of his contract and moved to OH Leuven in Belgium.

In early 2021, Keet moved back to his home country, joined Cape Umoya United, and appeared in six games. However, At the end of the season, He moved to Cape Town City F.C. He has not been part of the first team.

Keet is a married man living a happy married life and his wife and children. Darren exchanged his wedding vows and his longtime girlfriend, Sandra Keet, in 2014. They had a private wedding ceremony where they had invited only a few members from both the families and some close friends. The couple had been dating each other for several years before their marriage. Darren shares a photo with his wife and children SOURCE: [email protected]

Darren and Sandra welcomed their first child, Leighton, on January 10, 2015. They are very close to their children and spend most of their free time with them. The family of three extended to four with Layla's birth on December 28, 2019. Darren is an active social media user and shares numerous photos of his children and family.

Darren Keet has an estimated net worth of more than $1 Million. The South African soccer player has earned most of his net worth through his football career. A soccer player makes a reasonable sum through their sponsorship and advertising deals. As per sources, Keet earned more than $500,000 as his annual salary while playing in the Belgium football league. He still has some time before retiring and will be adding a considerable sum before retiring.