First Choice goalkeeper of Croatian National Team at the FIFA World Cup 2018, Danijel Subasic plays for Ligue 1 club AS Monaco. He started his professional career with Zader in 2003 and has been playing for Monaco since 2012.

Danijel Subašic was born on 27 October 1984 in Zadar, SFR Yugoslavia. His father Jovo Subašic is a Serbian with Serbian Orthodox faith while his mother is a Croatian with Roman Catholic faith.

He was raised as a Roman Catholic by his mother. He holds the dual citizenship of Croatia and Yugoslavia.

Danijel Subašic's Salary and Net Worth

The Croatian goalkeeper currently receives the weekly wage of €60,000 playing for Ligue 1 club AS Monaco. His annual salary is reported to be about €3 million at current in 2018. His weekly wage in 2015 was £20,000 and used to earn about £1 million in a year. Subasic's net worth is estimated to be around $5 million.

Subasic started his professiona career with Zadar in 2003 and remained in the club until 2009. He played overall 81 games. He also played for a season with Hajduk Split on a loan in 2008.

Subasic then joined Hajduk Split permanently in 2009 where he played in 77 matches. He left the club in 2012 and joined French Ligue 1 club Monaco. He was the part of the team that won Ligue 1 2016-17. He was named the best goalkeeper that season and was included in the team of the season. 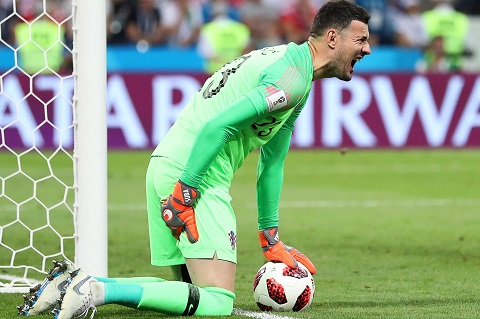 Sebacic is the part of the National team along with Luka Modric, Ivan Rakitic, Mario Mandzukic, that won the silver medal in the FIFA World Cup 2018. His brilliant performance helped the team reach the finals and was a key player against Denmark as he went on to save 3 penalties.

Danijel Subasic is married to his girlfriend Antonije Bozze. The couple together since Subasic was playing for Zadar. Antonije's father didn't like his daughter dating a Serbian and even threatened to kill her if she gets married to him.

My wife my rock my queen #ljubavsezoveimenomtvojim #a&s

Her father was charged with domestic violence. Subasic and his girlfriend used to live together since then in a rented apartment.

They later got married on June 17, 2007. The couple, together for 15 years, are the parents of two children.